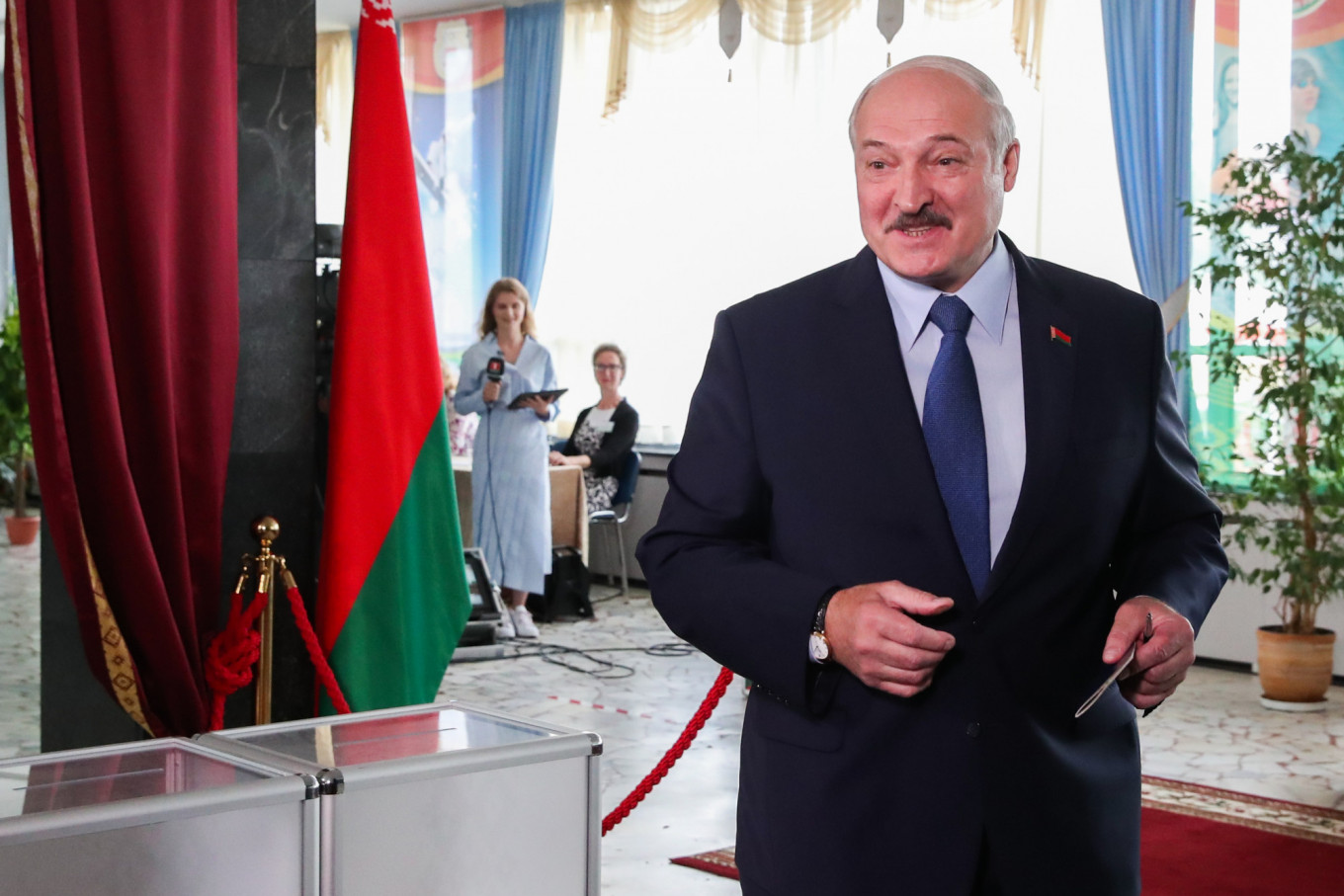 Belarusian President Alexander Lukashenko was set for an overwhelming victory in a presidential election on Sunday, an official exit poll said, after a political newcomer mounted a historic challenge to the strongman leader.

The exit poll for state television gave Lukashenko 79.7% of the vote, with main challenger Svetlana Tikhanovskaya coming second with 6.8%.

The opposition had said it expected the results to be rigged and some were already calling for protests on Sunday night.

The atmosphere in the capital Minsk was tense, with police and special forces on the streets and a Soviet-era protest song blasting from car radios and flats.

Huge queues had formed outside polling stations in the capital Minsk and other cities before voting ended at 8:00 pm local time (1700 GMT), after Tikhanovskaya urged her supporters to vote late to give authorities less chance to falsify the election.

Central Election Commission chief Lidia Yermoshina, who had denounced the queues as an “organised provocation”, said most polling stations had closed as planned but that voting would be extended at some to allow waiting voters to cast their ballots.

“I hope that the vote will also end without any problems” at these stations, she said on public television.

The first official results were expected in the evening, and the opposition said it would keep an alternative count.

Lukashenko, who has been in power since 1994 and is seeking a sixth term, has warned the opposition he is not planning to give up his “beloved” Belarus and security was dramatically tightened in the capital on Sunday.

Columns of military vehicles were seen on roads into Minsk, police carrying machine guns checked vehicles entering the city and government buildings were cordoned off.

Tikhanovskaya, a 37-year-old English teacher by training and stay-at-home mother, has emerged as the symbol of the ex-Soviet country’s new protest movement against Lukashenko’s rule.

She decided to run for president after the authorities jailed her husband, popular blogger Sergei Tikhanovsky, and barred him from running.

“I want honest elections,” she told cheering supporters outside a polling station in Minsk after a gruelling campaign that saw her draw massive crowds throughout the country.

At polling stations, many wore white bracelets that have become a symbol of the opposition. Tikhanovskaya wore one on each wrist.

Casting his vote, Lukashenko vowed to maintain order, suggesting his opponents may be planning unrest.

“Nothing will get out of control, I guarantee you … whatever certain people have planned,” the strongman said.

Political observers predicted Lukashenko would rig the vote in the absence of international observers. He won over 83% at previous polls in 2015.

Many Belarusians said 65-year-old Lukashenko’s time was up.

“I hope something will change,” said Vadim Svichkarev, a 49-year-old security guard. “It’s very hard to be stuck in the same position for 26 years.”

Tikhanovskaya’s campaign office said Sunday that one of her key allies, Veronika Tsepkalo, had left for Russia out of concern for her safety.

Tsepkalo, whose ex-diplomat husband Valery Tsepkalo was barred from standing, and Maria Kolesnikova, campaign chief of ex-banker Viktor Babaryko who was also dropped from the polls and is in jail, joined forces with Tikhanovskaya to mount the campaign.

Photographs of the three standing together and making their signature gestures —Tikhanovskaya’s punched fist, Kolesnikova’s fingers in a heart shape and Tsepkalo’s victory sign — have become an emblem of the opposition.

Nigel Gould-Davies, a former British ambassador to Belarus, said there was no doubt the polls would be falsified.

“The question is what happens then,” Gould-Davies, a senior fellow at the International Institute for Strategic Studies, told AFP.

In the past Lukashenko has crushed protests with riot police and hefty jail terms, prompting Western sanctions.

“Given Lukashenko’s ruthlessness, anyone who is concerned about Belarus will worry, will fear for the Belarusian people in the days ahead.”

Lukashenko has sought to galvanise support by warning of outside threats and raising the spectre of violent mobs.

Belarus has detained 33 Russians, describing them as mercenaries sent to destabilise the vote.