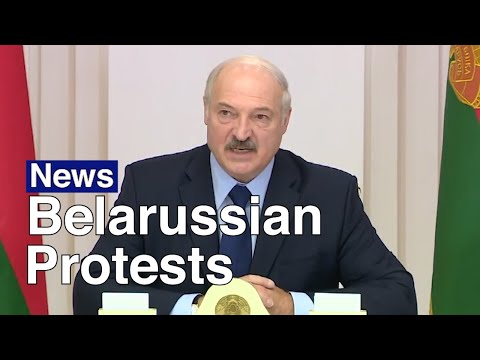 Belarussian authorities on Thursday detained President Alexander Lukashenko’s rival ahead of August’s election as Minsk intensified a crackdown on the opposition.

The detention of Viktor Babaryko, a 56-year-old former banker, on suspicion of financial crimes came after authorities jailed other critics including prominent opposition politician Mikola Statkevich ahead of an election in which Lukashenko is seeking a sixth term.

“Babaryko is detained because he was the organizer and leader of illegal activities, (and) tried to influence witness testimony,” said the head of the state control committee, Ivan Tertel.

Tertel claimed Babaryko was in cahoots with “puppeteers” from Moscow — “big Gazprom bosses” or even “higher-placed” figures.

“The rule of law must be respected,” she told reporters in Brussels.

“And the Belarussian people are asking for democratic elections.”

Babaryko’s detention was announced after police searched his home and questioned both the former banker and his son.

National television reported that around 20 people were detained in connection with investigations linked to Belgazprombank, and some were testifying against Babaryko.

Last week, investigators raided the offices of Belgazprombank and launched probes into tax dodging and money laundering against current and former bankers.

“Babaryko is a new figure in the opposition movement, he has become popular quickly,” said Klaskovsky. “Lukashenko’s nerves snapped.”

Vitali Shkliarov, a Harvard University fellow and Belarus specialist, said Lukashenko was wrestling with a combination of record low ratings, a tough economic situation and the shocks of the coronavirus epidemic.

Shkliarov said Lukashenko’s administation chose to crackdown on the opponents and accuse Moscow of interfering in the country’s domestic affairs in a possible effort to get the West on its side.

“This is a very reckless move,” he told AFP, stressing this could anger Moscow.

Law enforcement authorities in the former Soviet country have cracked down hard on would-be opposition candidates ahead of the August 9 election.

The run-up to the vote has seen a flurry of opposition activity which stood in stark contrast to the incumbent’s traditional Soviet approach to campaigning.

Popular vlogger Sergei Tikhanovsky, 41, who coined a new insult for Lukashenko when he called him a “cockroach,” has particularly stood out.

Tikhanovsky has been jailed on public order charges and authorities opened a criminal investigation against him and his supporters.

After his arrest, his wife Svetlana stepped into his place but has since faced threats against her family.

In early June, prominent opposition leader Statkevich was sentenced to 15 days in jail.

Statkevich, 63, was jailed for another 15 days on Monday, his wife said.

He challenged Lukashenko in elections in 2010 but was sentenced to six years in prison. He was released in 2015 and is barred from contesting the August poll.

Lukashenko, a 65-year-old former collective farm director, has ruled Belarus since 1994 and has raised the possibility of serving a further two terms.

The Belarussian opposition has been unable to get a foothold on political power.

Some candidates like Statkevich have spent long terms in jail, and not a single dissenting voice gained a seat in parliament in the 2019 poll.

Lukashenko has branded opposition activists “bands of criminals” who want to disrupt the election.

The Organization for Security and Cooperation in Europe, an international election and war monitor, has not recognized any polls in Belarus as free and fair since 1995.