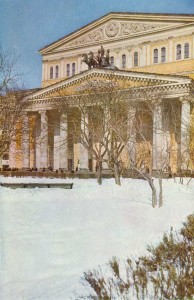 Festival of Art
In winter time the Russian theatre season is in full swing. All play houses are open and you are sure to meet your favorite actors. The Russian theatrical season has its own characteristic feature. It is a time when bright posters bill the names of young playwrights, directors and actors of ambitious talent, a new generation inheriting the traditions of their fathers and thus demonstrating the perpetuity of histrionics.
Over the brightly-lit entrance is the inscription The Moscow Art Theatre. At the beginning of this century it enriched the world theatre with productions of Chekhov and Gorky. Chekhov’s “The Sea Gull”, “Uncle Vanya”, “Cherry Orchard” and Gorky’s “Lower Depths”, along with splendid adaptations of Tolstoy and Dostoyevsky, have won eclat in different countries. World theatre goers have enthusiastically applauded the acting of Kachalov, Moskvin, Khmelev, Tarasova and Yelanskaya, true disciples of that great actor, director and theatre reformer Konstantin Stanislavsky. Every winter evening the lamps in a Moscow by-street shed their glow on the inconspicuous two-storey building, which has for its emblem on its facade the sea gull symbol of. Chekhov’s first play.
Theatre goers eagerly look forward to new productions at Moscow’s oldest play house, the Maly Theatre or “Ostrovsky Home”, as it is sometimes called. This company carries forward the traditions of the talented Russian actor families of the 19th and early 20th centuries, of the Sadovskys, the Turchaninovs and Ryzhovs.
In the very first years after the revolution the outstanding Russian stage director Yevgeny Vakhtangov produced plays that stirred human minds and hearts. And though decades have passed and Vakhtangov himself is dead, the theatre that bears his name continues the glorious traditions of its founder, that staunch advocate of genuine realism. The members of the Vakhtangov company know how to sway their audience and are excellent at revealing the inner world of the characters they portray. Incidentally, many of them have won wide popularity on the screen as well — for instance Yuri Yakovlev as Prince Myshkin and Yulia Borisova as Nastasya Filippovna in a screen adaptation of Dostoyevsky’s “Idiot”. These actors are still grander in the modern plays of Arbuzov, Pogodin and Zorin and it is delightful to be among the audience when these plays are running and live the lives of the characters on the stage together with the actors. A prominent figure in the Moscow theatre world is Nikolai Okhlopkov, the talented, daring and ever-searching director of the Mayakovsky Theatre, who has staged Euripedes’ “Medea”, Shakspeare’s “Hamlet” and Soviet, Spanish, French and Italian dramaturgists. How unexpected and modern his productions are! The spectator encounters a box of surprises, with the director’s concert acting, interpretation, decor and even stage being entirely novel. There are many famous men in the Soviet theatre world. Moscow and Saint Petersburg boast such talented stage directors as Yuri Zavadsky, Valentin Pluchek, Ruben Simonov, Nikolai Akimov, Georgy Tovstonogov and Leonid Vivien.
Theatre goers in both Europe and America are well familiar with the wizardry of puppeteer Sergei Obrastsov and the quick transformer ace Arkady Raikin.
You will have excitement and admiration galore at any show at any theatre in any town. You will spend a delightful night out at the Pushkin Drama Theatre or Gorky play house in Saint Peterburg, for instance.
Enter any theatre on a winter evening and as the curtain rises on the hushed hall you see people of the past and present walk the stage for you. You see life itself magically reproduced by the power of that art, whose name is the theatre.
The Moscow concert season is invariably a packed, eventful one. The Berezka dance group, the Soviet Army Song and Dance Ensemble or the Moiseyev Folk Dance ensemble traditionally start off new programmers at the Tchaikovsky Concert hall in the Soviet capital, and any Londoner, New Yorker or Parisian, finding himself in Moscow in winter will certainly steal a march on his fellow townsmen. It is from this place on Mayakovsky Square that these companies begin world tours.
Famous musicians, orchestras, and quartets perform daily in Moscow, home of such celebrities as pianists Svyatoslav Rikhtcr and Emil Gilels, violinists David Oistrakh and Leonid Kogan, cellist Mstyslav Rostropovich, singers Zara Dolukhanova, Galina Vishnevskaya, and Irina Arkhipova and conductors Kirill Kondrashin and Gcnnady Rozhdestvensky — to mention a few.
The Russian winter is a real festival of art — music, and choreography, plus the world’s best circus with its hilarious clowns and superb tight-rope walkers, bareback riders, and animal tamers.
There is no winter like a Russian winter. It is really impossible to tell you all about it here.