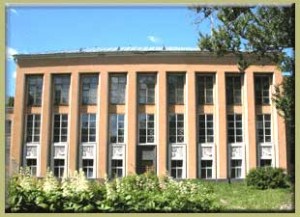 Botanical Gardens and Botanical Museum of the Academy of Sciences of the Russia: Aptekarsky Ostrov (Apothecary’s Island), Dlitsa Professora Popova, 2 (2, Professor Popov Street).
The Botanical Gardens are one of the leading Russian centres for acclimatizing plants and for testing and rearing valuable new crops.
As early as 1714 the Gardens were founded by a decree of Peter I as an Apothecary’s Vegetable Garden for the purpose of cultivating medicinal herbs; and in the 1730’s it became a regular scientific centre of that time.
The Botanical Museum was set up in 1823 and now it possesses numerous plants on display, among which one may see rare specimens of the world’s flora collected by the outstanding Russian scientists N. M. Przhevalsky, V. I. Roborovsky, P. K- Kozlov and V. L. Komarov, after whom the Botanical Institute of the Academy of Sciences of the Russia is named.
Today the museum has 5,000,000 specimens of plants, which makes it one of the largest herbariums in Europe. In addition to the herbarium, the museum has collected one hundred thousand specimens which are on view in the park as well as in the hot-houses.
Botanical Museum