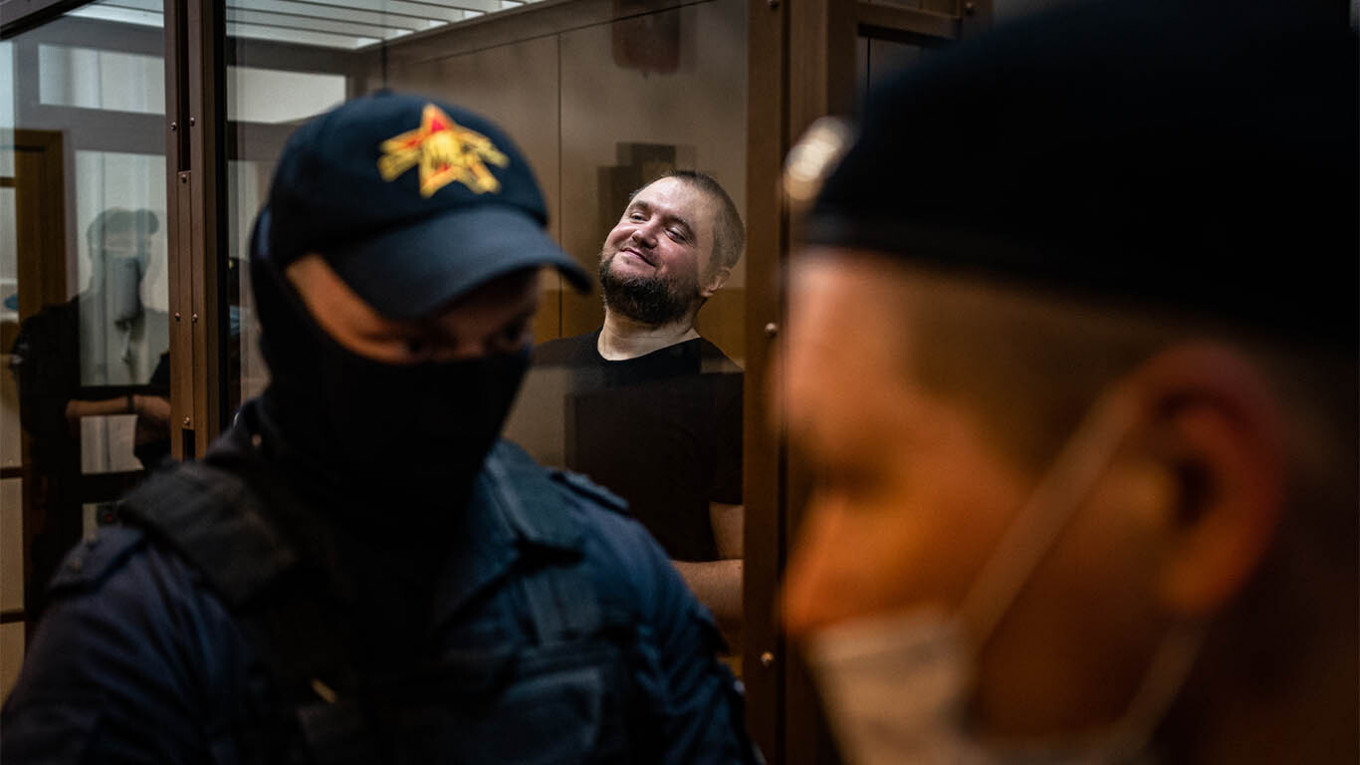 When police moved in to arrest Vladimir Vorontsov in May, they didn’t bother to knock.

Instead, two commando teams stormed the former policeman’s top-floor apartment in southeast Moscow at around 7:00 a.m., one abseiling down the high-rise while the other broke down the door.

“Our daughter thinks that bandits came and took daddy away,” Aleksandra Vorontsova told AFP, describing the swoop on her husband, an activist for police labor rights.

During a five-hour search, investigators even combed through their four-year-old’s toys, socks and underwear, she said.

Vorontsov, who quit the Moscow police force in 2017 after 13 years, has been charged with extortion.

Supporters of the stocky, blue-eyed 35-year-old say that the real reason for his arrest is his Police Ombudsman project, a series of linked social media accounts dedicated to protecting police officers’ rights and exposing abuse by their superiors.

His case has sparked a rare public outcry among police, a key pillar of President Vladimir Putin’s rule, that could eventually spell trouble for the Kremlin, observers say.

Vorontsov has spent two months in pre-trial detention and on Thursday a Moscow court extended his arrest until early August.

He denies any wrongdoing.

With no genuinely independent police trade unions in Russia, Vorontsov’s initiative has become popular, attracting more than half a million followers.

It has exposed allegations of corruption within law enforcement and denounced pressure on officers to fulfil quotas for fines and arrests.

It has also drawn attention to long working hours and suicides in the police force, for which precise figures are not publicly available.

Vorontsov has criticized excessive use of force by police and supported claimants’ successful legal court cases.

For the first time, members of Russia’s 750,000-strong police force have openly challenged the authorities over Vorontsov’s treatment but also on the functioning and methods of the police, at a time when policing in the United States is under intense scrutiny following the death of George Floyd.

Dozens of serving and former police staff in Russia have taken to social media to call for Vorontsov’s release.

Some posted photos of themselves, others released anonymous pictures of their police hats and protest signs.

Several have told AFP that it was important to support Vorontsov despite possible repercussions.

Two days after his arrest, former neighborhood police inspector Georgy Zarya marched to Moscow police HQ for a one-person demonstration — the only kind allowed in Russia without prior permission — and held up a sign urging the city’s police chief to resign.

He was detained for two hours.

“If we don’t stand up for Vorontsov now, things will only become worse,” the 36-year-old said.

While on the job, he’d made no secret of his disdain for the notorious system of quota-based policing, in which staff are often required to issue a predetermined number of fines or make a certain number of arrests.

“The quota system is the bane of the Interior Ministry,” Zarya said.

“If you don’t expose an administrative offense, you may not be able to hand in your service weapon in the evening. And how can you go home with a gun?” he said in an interview.

After more than 12 years on the force, Zarya now has nowhere to live as he has not received a housing grant to which he is entitled.

Vorontsov has helped him file a lawsuit against the Interior Ministry.

Mikhail Tsaplin also spoke out in support of Vorontsov, two weeks before retiring from the police in the town of Gus-Khrustalny, 250 kilometers (155 miles) east of Moscow, after 20 years.

Dressed in uniform, he posted a picture of himself on VKontakte, the Russian equivalent of Facebook, with the words: “I am/We are Vorontsov. I am not afraid.”

“He is neither a terrorist, nor an extremist, nor a murderer, nor a child molester,” he told AFP in a phone interview.

Tsaplin retired, he said, because he no longer wanted to be part of a flawed system.

“I can no longer wear a uniform,” he said. “I don’t like what’s happening. The system is crumbling from within.”

Tsaplin, who was paid a monthly salary of 43,000 rubles ($620) — above the average for his region — said that while ordinary police lived modestly, some senior officers were deeply corrupt and gave the force a bad name.

A police investigator from a major Russian city said that he and a colleague had become targets of an internal probe after posting pictures of themselves supporting the activist.

He fears he could be fired from the job he “loves.”

The investigator, who spoke to AFP on condition of anonymity, said that Vorontsov was a hate figure for the authorities because he encouraged police to stand up for their rights.

“The government has taken away everything from us,” he complained, stressing that police officers can be sacked for taking part in demonstrations and that election results in Russia were largely predetermined.

He also said that officers had to obey what he called “criminal orders” to break up peaceful rallies, accusing authorities of purposefully pitting police against ordinary citizens.

“Have you ever seen protesting police? No. Are we happy with everything? No,” he added.

All three men said they believed that Vorontsov’s arrest was retribution for his work.

Why Are Russian Cops Killing Themselves?

They and other critics say police staff often have to buy their own uniforms and office equipment and are forced to accept unpaid overtime and unfair dismissals.

Conditions for many are so hard, they say, that dozens of police in Russia commit suicide every year.

The Interior Ministry did not respond to AFP’s requests to comment on Vorontsov’s activities and detention.

But Mikhail Pashkin, head of the Moscow Police Trade Union, seen by some as close to the interior ministry, accused Vorontsov of seeking to make “big money” by helping policemen and interfering in politics.

“There are problems in the Interior Ministry system,” he acknowledged.

“On the whole, Interior Ministry employees are treated very badly. Many superiors consider them slaves rather than humans,” he told AFP.

“Smart bosses understand that a trade union is not an enemy.”

Supporters believe that Vorontsov has made enemies in the upper echelons of the police force and several senior officers have lost their jobs due to his activism.

In a well-publicized case, the top policeman in the Siberian region of Novosibirsk, Yury Sterlikov, resigned in April after the Police Ombudsman published a recording in which a senior policewoman was heard ordering her subordinates to issue mass fines for coronavirus lockdown violations to meet a quota.

The policewoman also lost her job after the uproar.

Since being arrested, Vorontsov also faces three further probes, including for distributing and producing pornography.

Igor Khudyakov, an ally who helped run the online project, has also been arrested.

For some, Vorontsov’s project was also an unusual opportunity to express anti-Kremlin views, said a former police major, who spoke to AFP on condition of anonymity.

“There are plenty of those” who oppose Putin among the police, he said.

The president, a 67-year-old ex-KGB officer, has ruled Russia for two decades and could remain in power until 2036 following a controversial vote to amend the constitution.

The police, together with the army and security services, form the backbone of his regime.

“It is critically important for the authorities to retain the loyalty of law enforcement,” said Sergei Davidis, head of a political prisoners’ support program at rights group Memorial.

But the pro-Vorontsov campaign, Davidis added, could signal a change in “public conscience,” as some polls indicate record low approval ratings for Putin in the coronavirus economic slump.

His cause has won backing from outside the police too, including prominent Moscow journalist and opposition activist Ilya Azar, who was jailed for 10 days after picketing.

Though smaller in scope, the drive in support has drawn comparisons with last year’s campaign over investigative journalist Ivan Golunov’s detention.

Golunov was arrested on trumped-up drugs charges but released after demonstrations.

While Vorontsov has received many plaudits, he has been criticized too, with some police claiming his “rock-star” fame has gone to his head.

However, even some opponents acknowledge the importance of his work.

Vorontsov himself was once a member of the interior ministry’s anti-extremism unit, known for harassing anti-Kremlin campaigners.

He set up his Ombudsman project in 2017 while still in the police, driven by a desire to highlight allegations of injustice and violations.

In recent months, he has established close contacts with opposition activists and following his arrest, chief Kremlin critic Alexei Navalny’s team urged police officers to keep up the pressure.

“This man was on your side,” Moscow campaigner and Navalny ally Lyubov Sobol said in a video address.

She told AFP that some police thanked her for sticking up for Vorontsov.

In a terse Instagram reaction, Interior Ministry spokeswoman Irina Volk wrote “here it comes,” appearing to suggest that the opposition — whose members often suffer police brutality — was beginning to flirt with disgruntled officers.

Aleksandra Vorontsova said that her husband had anticipated government pressure but hadn’t expected it to be so harsh.

“He now understands that they can come for anyone,” she said.