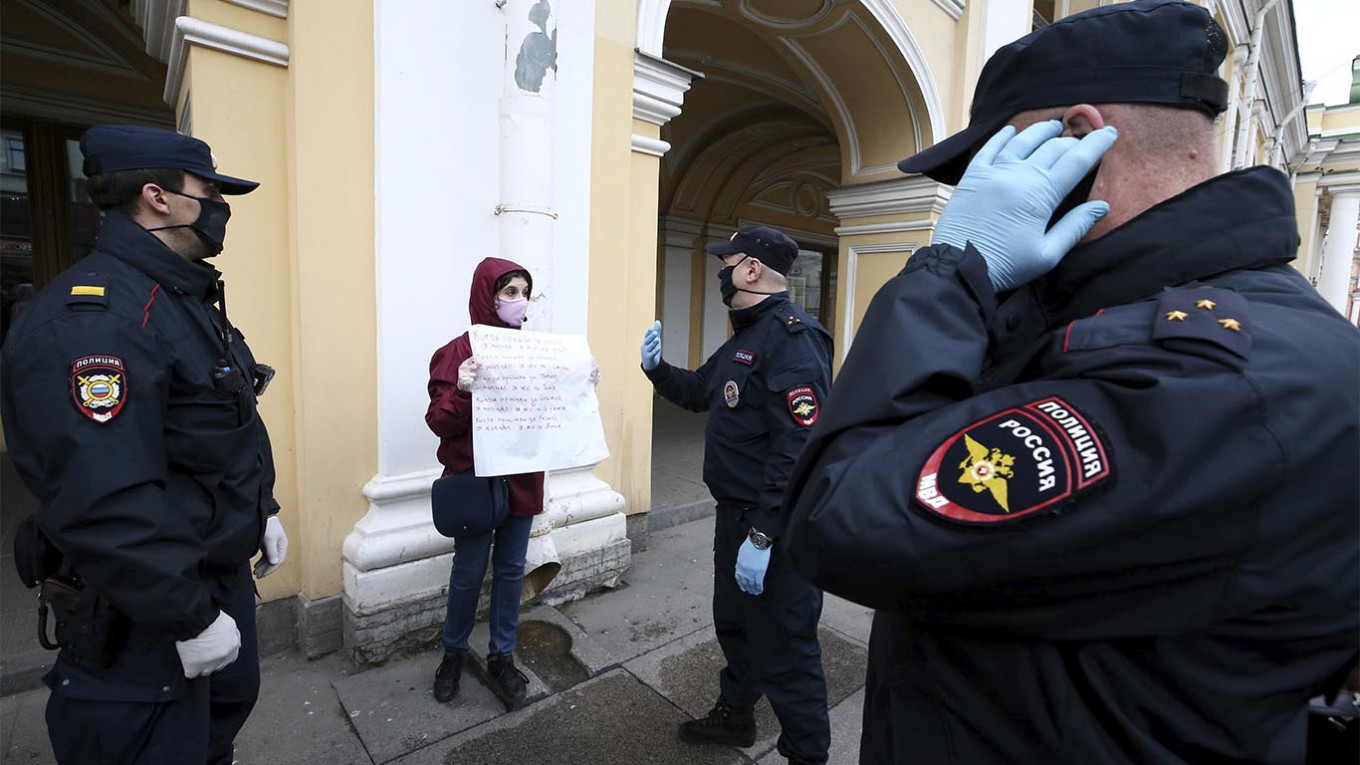 Several protesters have been detained outside Moscow’s police headquarters Friday as solo pickets demanding the release of a journalist arrested for a similar picket this week continued into their second day.

The latest detentions follow those of eight prominent journalists at the same location Thursday for protesting the 15-day jailing of their colleague, activist and municipal deputy Ilya Azar. Police said the journalists had been detained for violating a ban on rallies during Moscow’s citywide quarantine to slow the spread of coronavirus.

Police have apprehended at least 20 people, including five municipal deputies from an opposition party, the Meduza news website cited its reporter on the ground as saying.

Another opposition party municipal deputy was detained outside the Moscow police building earlier in the day.

Law enforcement officials used loudspeakers to tell others gathered at the scene to disperse during the coronavirus lockdown, according to Meduza.

Police issued a warning earlier Friday that public assembly is not allowed under restrictions placed to slow the coronavirus outbreak. Amnesty International said Russia should stop using the coronavirus epidemic as a pretext to muzzle activists.

Reporters also said that at least four activists were detained at similar pickets in support of Azar in St. Petersburg. The chief editor of the Znak.com news outlet staged a single picket in Russia’s fourth-largest city of Yekaterinburg without being detained earlier Friday.

Police detained Azar, 35, on Tuesday during a demonstration in support of activist Vladimir Vorontsov and sentenced to 15 days in jail for repeat violations of a protest law.

Vorontsov, who has worked to expose violations within Russia’s law enforcement agencies, was arrested in early May on extortion charges. He was later accused of also illegally distributing pornography and had two more charges added Friday.

Vorontsov has denied the charges, saying police are seeking to punish him for his activism.

Russia has recently cracked down hard on opposition demonstrations, and the single-person protest is the only kind allowed without prior permission from the authorities.