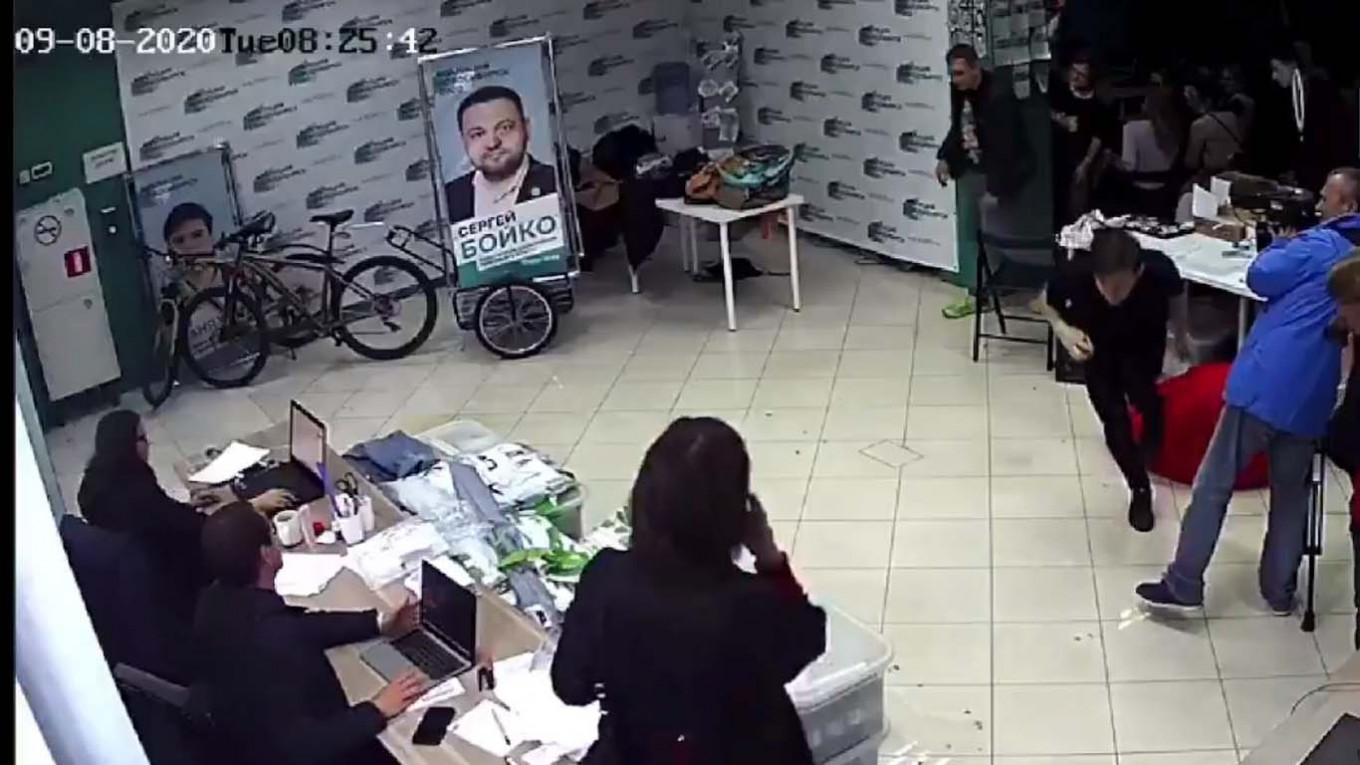 Assailants have spilled a foul-smelling liquid at the office of Siberian opposition candidates backed by Kremlin critic Alexei Navalny ahead of upcoming regional elections, the candidates said Tuesday.

The attack is the latest attempt to disrupt the work of a coalition of opposition candidates planning to challenge pro-Kremlin incumbents in the Novosibirsk city council elections on Sept. 13. Authorities previously barred the candidates from setting up campaign stands and twice fined coalition leader Sergei Boyko for organizing “unauthorized” mass gatherings, the independent Novaya Gazeta newspaper reported.

Security footage recorded Tuesday morning showed a hooded young man in a surgical mask entering, then immediately fleeing, the coalition’s office, with attendants filing out one by one soon after. Boyko said in a tweet that the man had smashed a bottle of “pungent liquid.”

“But the doctors started saying that [the volunteers] simply got worked up right after finding out that they were ‘from Navalny’,” Guseva added in a tweet.

Navalny had traveled to Novosibirsk to film an anti-corruption investigation and support the opposition coalition before falling violently ill on Aug. 20 and staying in a coma for nearly two weeks afterward. Germany, where Navalny was flown for treatment after two days in a Siberian hospital, said Navalny was poisoned with a military-grade nerve agent from the Novichok family.

Siberian doctors maintain that no toxic substances were found in Navalny’s system and Russian officials have accused Germany of “bluffing.”

Navalny has also promoted his “Smart Voting” tactic, which advises supporters to vote for the candidate with the best chance of defeating a pro-Kremlin opponent, ahead of Russia’s 2021 parliamentary elections.

“This idea of attacking with a chemical wouldn’t have come to mind if the criminals who had poisoned Navalny were in pre-trial detention,” Zhdanov said in a Facebook post.