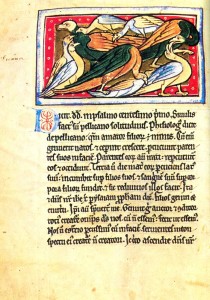 Pelican /pelicanus, onocrotalus/ 10.2X5.8 cm
The Latin versions of the text about the pelican take rise in the Greek version. The bestiary, like version “B” of Latin “Physiologus”, opens the tale of the pelican with the quotation of the woebegone psalmist compared to a pelican in the desert /Psalms 101:7/. When the pelican younglings have grown up, they slap their parents in the face with their wings and the parents, striking back, kill them and become inconsolable. Three days later the mother pierces her breast, pouring her blood over the dead bodies. This brings them to life. That was the behaviour of many who, like the young pelicans, turned away from the Creator. The pelicans’ love for their young sumbolizes the love of Christ for mankind. Following Isidor /XII.VI.26,32/. who proceeded from Pliny /X.47, 61/, the bestiary explains the Greek name of the bird “onocrotalus”, by “longum rostrum” /long beak/ and describes the habits of this Nile bird. Philippe de Thaiin /2323—2366/ and Guillaume le Clerk /521—614/ describe the self-sacrifice of the father pelican, and not of the mother. Albert the Great describes the pelican in the chapter called “Onocrotalus” /XXIII.1.96/ and he tells the story of the pelican bringing back to life her younglings in the chapter “Pellicanus” /XXIII.I.90/, explaining it by a legendary tradition. The most ancient legend about a pelican related to the symbolism of death, birth and ressurection allowed the medieval painter to draw a complex decorative composition of entwined figures of birds in conformity with the laws of the Romanesque art filling up the rectangular surface of the miniature with a delicate filigree of stylized figures. The depiction of the pelican in medieval art most often follows the canonical pattern though eventually it comes to acquire a truly dramatic sentiment.