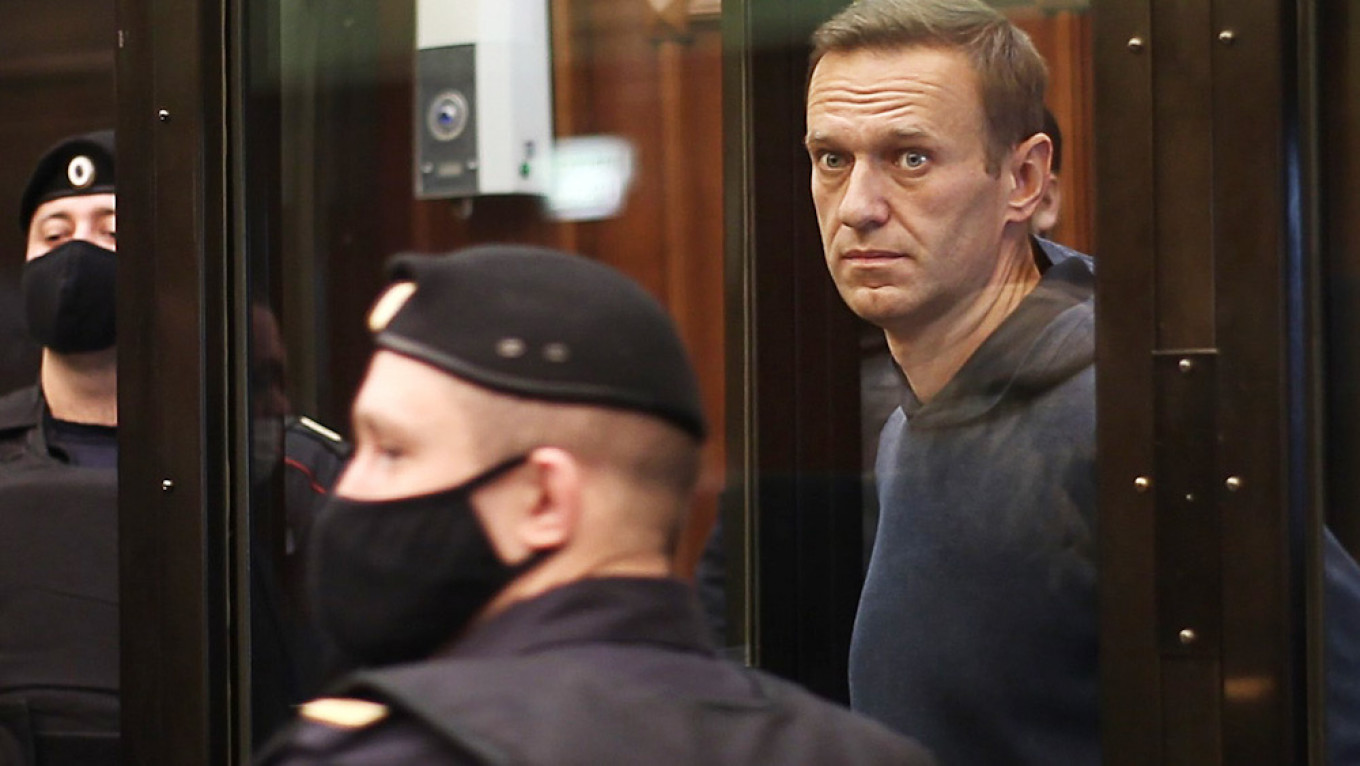 A Moscow court on Tuesday sentenced Russian opposition leader Alexei Navalny to two years and eight months in a prison colony, after his arrest last month prompted tens of thousands to rally in his support across the country.

The 44-year-old anti-corruption activist was convicted of violating a 2014 suspended sentence for fraud by missing probation check-ins while he was in Germany recovering from a near-fatal poisoning he says was ordered by Russian President Vladimir Putin.

“It’s easy to lock me up. The main thing in this process is to intimidate a huge number of people, this is how it works. They are putting one person behind bars to scare millions,” Navalny said in his closing statement before sentencing, dressed in a dark blue hoodie and speaking from a glass cell inside the Moscow City Court.

Navalny also mocked Putin, saying he would go down in history as Vladimir the Poisoner of Underpants, in reference to his allegation that agents from the Federal Security Service (FSB) placed the Soviet-era nerve agent Novichok in the lining of his underwear.

“We hope that such nonsense as linking the prospects of Russia-EU relations with the resident of a detention center will not happen,” he told reporters, sticking to a Kremlin tradition of never using Navalny’s name.

UK Foreign Secretary Dominic Raab described the ruling as “perverse” and called for the release of Navalny and all “peaceful protesters and journalists arrested over the last two weeks.” U.S. Secretary of State Anthony Blinken tweeted that he was “deeply concerned.”

After two consecutive weekends of protests quelled by severe crackdowns in Russia’s major cities, much of northeast Moscow had been locked down by a massive police presence as the hearing played out.

Lines of fully armored riot police blocked off access to the court and officers checked journalists’ credentials at a series of military-style checkpoints beginning around half a mile from the court building.

Throughout the course of the day, almost 350 people were detained on the approaches to the courthouse after they exited the nearest metro station, according to the OVD-Info police monitoring group.

Only a handful of Navalny supporters managed to slip through the police ranks.

Yevgeniya, a 27-year-old illustrator who declined to give her last name, said she had got up at the crack of dawn to be there.

“I’m here because Navalny shouldn’t be jailed, this case is entirely political and contradicts every right our constitution gives us,” she said.

Arsen Bilalov, a 42-year-old teacher, had traveled almost 2,000 kilometers from his hometown of Makhachkala in the southern Russian republic of Dagestan, where he had already been briefly detained for protesting on Jan. 23. He said he had supported Navalny since the opposition leader exposed corruption in the Dagestani government a decade ago.

“We have to defend Navalny today, because otherwise even worse things will happen tomorrow.”

Not everyone near the courthouse was a fan of Navalny. A woman returning to her home in the area had no time for the protesters and journalists present, and shouted that Navalny was an agent of the U.S. government.

The original suspended sentence handed to Navalny was for 3.5 years, but the roughly one year he already served under house arrest as part of the first trial will count against that time, meaning he will be imprisoned for a total of two years and eight months.

Navalny is due for another court appearance later this week on charges of defaming a World War II veteran. In December, Russian investigators opened another ongoing criminal probe into Navalny, alleging he used donations to his organizations for personal purposes including holidays abroad. That charge carries a penalty of up to 10 more years in prison.

After Tuesday’s sentence was announced, Navalny’s supporters in Moscow called for immediate protests near the Kremlin despite heavy riot police presence throughout the city center.

Demonstrations in his support have been attended not just by Russians demanding his release, but also by those angry at falling living standards who were spurred on by an investigation Navalny released after his arrest claiming that Putin owns an opulent billion-dollar palace on the Black Sea coast.

While some of those gathered outside the courthouse on Tuesday were longtime Navalny supporters, others had joined the cause after his return to his homeland.

“Before last summer we weren’t especially supportive of Navalny,” said Kseniya, a 30-year old marketing director and veteran of a decade of Moscow protest movements who had come to the court with her husband.

“But the story of his poisoning and return to Russia was really impressive. You have to be sincere to do that. He showed that he’s willing to die for this country.”

With reporting from AFP.