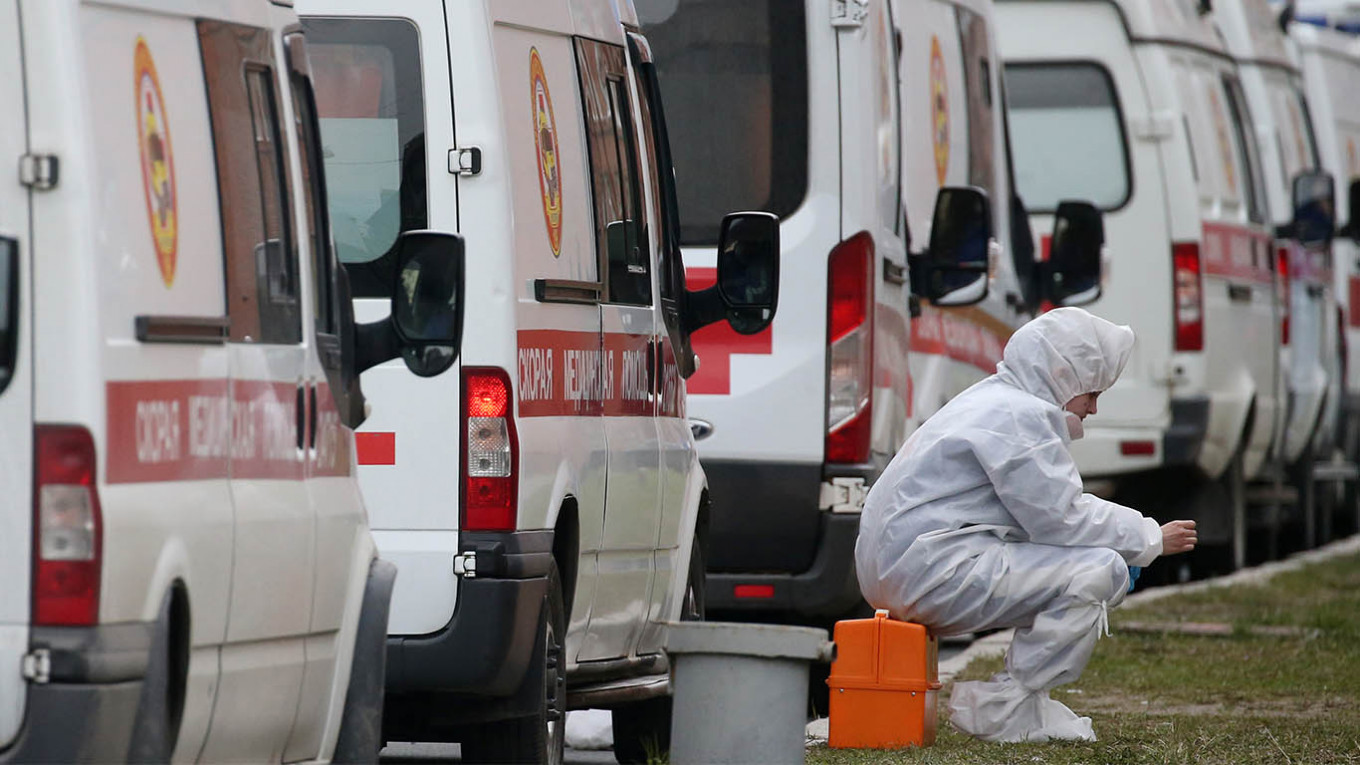 At the end of a 24-hour-shift on Monday, Ruzanna Kirakosyan realized she had come down with a high fever.

So the 47-year-old paramedic in the Moscow region city of Mozhayzk decided it was time to stay home. Before that, she said, she couldn’t make an informed decision because no one in her station had been tested for the coronavirus a single time since the pandemic hit Russia.

“Yesterday we only had two-and-a-half brigades,” Kirakosyan told The Moscow Times Friday evening. She explained that when fully staffed the station has seven brigades, each required to have two medics.

“We have drivers left but no medics to fill their ambulances.”

On Saturday morning, Russia recorded 9,623 new coronavirus infections, marking a new one-day record increase and bringing the country’s official number of cases to 124,054. More than 64% of the new infections were between Moscow and the Moscow region.

As the coronavirus pandemic rages on, the healthcare system for Russia’s most populated area has been stretched to the limit — its ambulance system perhaps most of all.

2% of Moscow Residents Have Coronavirus: Mayor

Over the past week, ambulance workers have been featured prominently on state media, depicted as stoic heroes battling the pandemic. The flurry of coverage coincided with Russia’s unofficial day of ambulance workers — April 28 — which that same day President Vladimir Putin declared a new national holiday.

“Thank you for your work that is so needed by people,” he said during a televised conference call with officials. “In these busy days and weeks you are showing courage, your best human qualities.”

One paramedic summed up those qualities in an interview with the state-run RIA Novosti news agency: “We just need a little patience and everything will be fine.”

But in interviews with The Moscow Times, a half dozen ambulance workers in the Moscow region — which state television this week described as having one of the largest ambulance corps in the country — described growing despondency among their ranks.

Just one day before Putin’s comments, on April 27, 61-year-old Moscow paramedic Mikhail Lebedev succumbed to Covid-19. According to an unofficial count by doctors, he is one of nine ambulance workers who have been killed by the coronavirus nationwide.

“I’m very scared,” Dmitry, a 49-year-old ambulance driver in the Moscow region city of Krasnogorsk, who asked that his last name be withheld, said Wednesday. “Just this morning one of our drivers was put on a ventilator.”

In interviews, ambulance workers complained officials were hanging them out to dry despite promises to come to their aid.

Of the ambulance workers who spoke with The Moscow Times, only Dmitry Belyakov, a 54-year-old driver in the Moscow region city of Zheleznodorozhny, said he had received a bonus so far. It totaled 7,200-rubles ($95.40).

“No one cares about us,” Kirakosyan said. “We’re not waiting for the money to be quite honest. They promise a lot — we were also supposed to be tested once a week.”

In St. Petersburg, when tests were done earlier this week on ambulance workers at a research institute that had been ferrying patients, 111 tested positive.

Ambulance workers in the Moscow region blamed a lack of personal protective equipment (PPE) for the fact that so many of them have become infected with the coronavirus. Most said their brigades had purchased construction worker suits at Leroy Merlin — a home improvement chain widespread around the region — which they bleach after their shifts and dry in their stations.

That wouldn’t have been clear from watching a program on state television channel Moskva 24 this week showing three workers in the Moscow region dressing in top-of-the-line PPE before a shift.

“The thing is we only have a few suits like that for the entire region,” said Yevgeniya Bogatyryova, a 33-year-old paramedic in the Moscow region city of Korolyov.

“I told them this, but of course they left that out,” Bogatyryova, who was quoted in the report, added with a sigh.

Bogatyryova, who is also the representative for the region’s ambulance workers with independent medical labor union Destviye — or Action — said that every day she gets new calls from ambulance workers complaining that they are sick with fevers and viral respiratory symptoms and can no longer work.

With fewer and fewer people available for shifts, the work becomes more difficult for those still able.

“We are not even at the peak yet and a brigade in the best-case scenario is getting 25 requests per 24 hours,” Bogatyryova said. “We joke that if the virus doesn’t kill us, exhaustion will.”

On top of a deficit of PPE and colleagues to share the workload, hospitals are running out of beds.

“Last week we took someone with double pneumonia to a hospital in Zheleznodorozhny, but there was no space so we took him to Klin, where there also was no room,” Kirakosyan said, referring to another Moscow region town. “After 15 hours we brought the patient home. The next morning we went out with him again.”

Yelena Novikova, a 50-year-old paramedic in the Moscow region city of Balashikha, laid out a grim account of her past few weeks.

“I brought patients home multiple times and had to leave them there because there was no space at hospitals,” she said. “I don’t know what happened to them after that.”

Novikova is now on sick leave at home with a high fever and pneumonia in both lungs, which was found after she went to a clinic for a CT scan earlier this week.

“We weren’t tested once,” she said. “Management told us: ‘Who would work?’”

Some ambulance workers said they are trying to remain hopeful.

Dmitry, the driver in Krasnogorsk, sent The Moscow Times screenshots of a group chat for drivers at his station after their colleague was hospitalized Wednesday in the Moscow region city of Odintsovo.

“We’ll all go there,” one driver wrote.

“Cross yourself,” another responded.

“They’ll cure him,” the first driver replied, “and then we’ll all have a good time.”