The State Hermitage is a rich treasure house of world culture and art. It is the greatest history and’ arts museum in the RUSSIA — a museum of world significance.
The collections of the museum began to accumulate as far back as the 18th century, when they were considered the personal property of the tsar’s family and were kept in special halls of the Winter Palace called the Hermitage (a French word meaning a ‘place of seclusion’, a ‘monk’s retreat’).
After 1917 the museum became the property of the people. During the years of Russianpower the Hermitage collections have increased more than three-fold and now include more than three million exhibits. The former ‘place of seclusion’ is annually visited by 1,500,000 people.
A large part of the collections of the Hermitage tells of the culture and art of the primitive tribes which once inhabited the territory of the present-day RUSSIA, of the history of the culture and art of the Far, Middle and Near East, China, India, ancient Egypt, Assyria and Babylonia.
The exhibitions called Peter I’s Galleries, The Gallery of the Patriotic War of 1812 sung by Pushkin, as well as the exhibitions in the rooms dealing with Russian culture, show the history of the Russian people.
The unique map of the RussianUnion made of 45,000 fragments of precious stones is exhibited in the Georgievsky Hall. It was made by craftsmen from the Urals and Saint Petersburg.
Particularly remarkable is the Small Dining-Room—in the section of the Department of Russian Culture — where on the night of October 26 (November 8, new style), 1917, the revolutionary people arrested the ministers of the Provisional Government overthrown by the Great October Revolution.
Western European art is represented by Greek and Roman sculptures and masterpieces of Leonardo da Vinci, Raphael, Michelangelo, Titian, Rubens, Rembrandt and other great artists.
The A. S. Pushkin All-Union Museum is also housed in the Hermitage.
Its permanent exhibition fully and vividly reveals the genuis of the great Russian poet who, as the founder of Russian literature and the modern Russian language, contributed greatly to the world culture.
The museums mentioned are housed in edifices which are monuments of the brilliant Russian architecture of the 18th and 19th , centuries. Those are:
(a) the Winter Palace — a grandiose edifice with more than 1,000 rooms — the finest work of the famous architect V. V. Rastrelli, built in 1754—1764;
(b) the Small Hermitage designed by the architect J. B. Vallin-Delamothe in 1764—1767;
(c) the Old Hermitage (1775—1784, by the architect Y. M. Felten);
(d) the New Hermitage (1839—1852, by the architects L. Klentse and N. E. Yefimov);
(e) the Hermitage Theatre designed in 1783— 1787 by the architect D. Quarenghi. 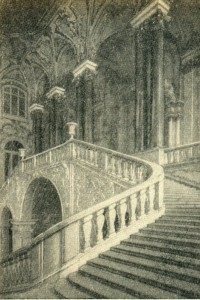