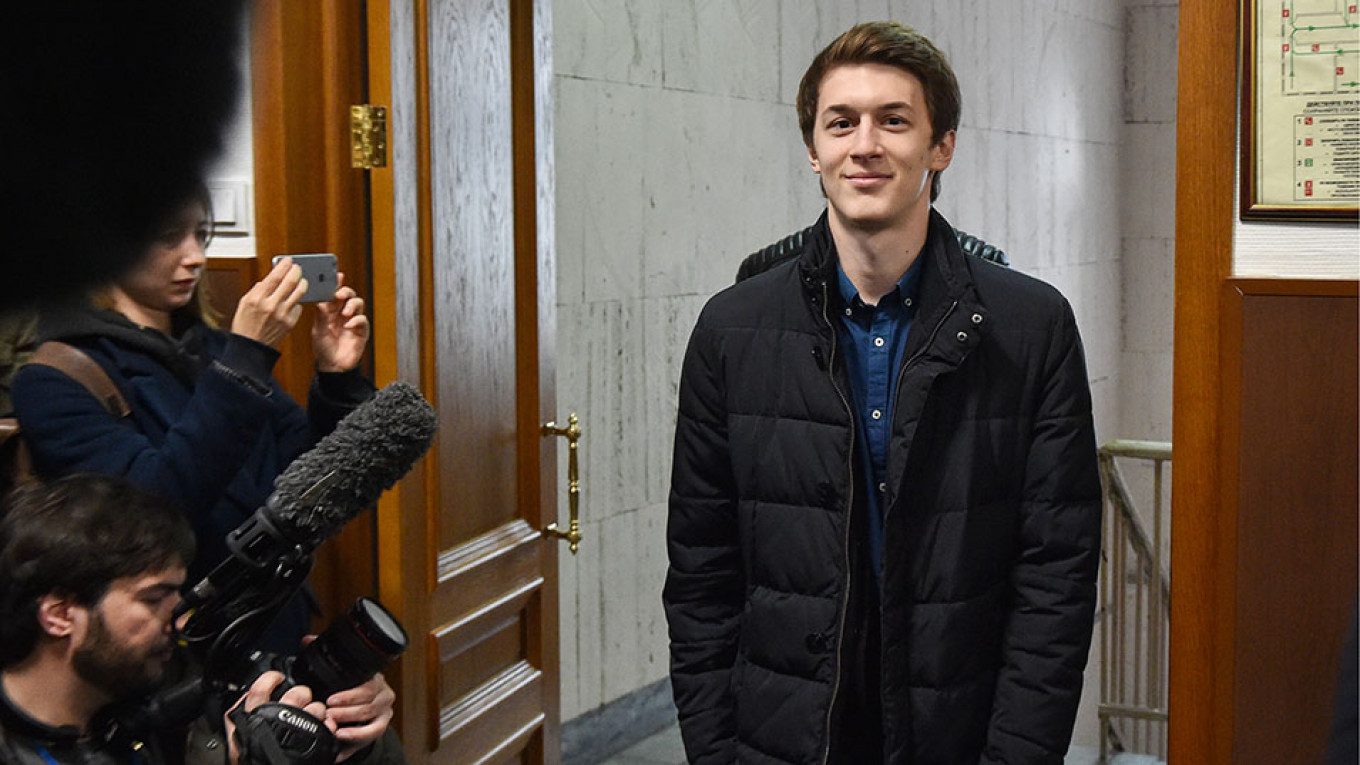 Popular YouTube blogger and political science student Yegor Zhukov faces up to five years in prison on charges of calling for extremism online, a case that critics say is politically motivated.

Authorities initially charged Zhukov, 21, with mass unrest in connection with anti-government protests that swept Moscow this summer. After fellow students and activists campaigned in Zhukov’s support, investigators dropped that case and charged him with calling for extremism online instead.

Prosecutors on Wednesday asked the judge to sentence Zhukov to four years in prison ahead of his verdict Friday.

Here are excerpts from Zhukov’s closing statement from Wednesday night:

‘The darker my future, the wider my smile’

“I look at the guys with whom the Moscow case has brought me together — Kostya Kotov and Samariddin Radzhabov — I see smiles on their faces… I’ll try to follow their example. I’ll try to be happy that I have a chance to pass this test in the name of values I hold dear.”

“After all, your honor, the darker my future, the wider I smile toward it.”

‘We forgot how to love’

“Surely, my motives have by now become clear. I really want to see these two qualities in my [fellow] citizens: accountability and love. Accountability for ourselves, for those near us, for the entire country. Love for the weak, the neighbor, the humanity. This desire, your honor, is another reason why I couldn’t have called for violence [online].”

“In spite of all the obstacles, I don’t doubt for a moment that my wish will be fulfilled. I look ahead, beyond the horizon of years, and see Russia full of responsible and loving people. It will be a truly happy place.”

“The trial currently taking place is dedicated primarily to words and their meaning. We discussed specific phrases, nuances of meaning, ways of interpretation. I hope that we’ve been able to prove to the esteemed court that I’m not an extremist, both linguistically and in terms of common sense.”

“I’d like to address a more fundamental issue … the motives of my actions. … My motives are deep and genuine, they drive me into politics.”

“To understand my motives, it’s enough to look at how the current Russian state actually protects the Christian values it proudly positions itself as defending.”

“But is that what they teach us? Are those the ethics children learn in schools? Do we honor heroes like that? No.”

“The only traditional value that the current Russian state truly honors and strengthens is autocracy. Autocracy that tries to break the life of anyone who sincerely wishes the best for their homeland, who doesn’t hesitate to love and take responsibility.”

“As a result, the citizens of our long-suffering country had to learn that no good deed goes unpunished, that the authorities are always right simply because they’re the authorities, that happiness here may be possible — but not for them.”

“Having learned that, they began to gradually disappear.”

“Miron Fyodorov [popular rapper Oxxxymiron], who attended my hearings many times, once correctly observed: Our alcohol is cheaper than textbooks.”

“The state has created all the conditions to ensure that, between responsibility and irresponsibility, Russians will choose the latter.”

The ‘Celebritization’ of Protest in Russia

“According to [state statistics agency] Rosstat, Russia is gradually disappearing at a rate of minus 400,000 people a year… They drink from powerlessness, they freeze in unheated hospitals, they’re killed by someone, they kill themselves — just like you and me.”

“The current situation in the country destroys any opportunity for human prosperity: 10% of the most affluent Russians have concentrated 90% of the country’s wealth.”

“What’s left below is only despair. Knowing that they have nothing to count on and they won’t be able to bring happiness to themselves or their families no matter how hard they try, Russian men either take out all their anger on their wives, get drunk or hang themselves.”