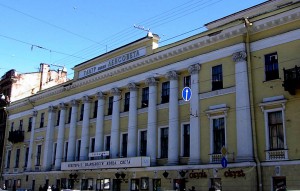 The theatre began its creative life more than 30 years ago. Plays by A. N. Ostrovsky, A. P. Chekhov, A. M. Gorky, as well as by foreign writers, were staged here.
During recent years many plays produced by the theatre have enjoyed great popularity witfj the audience, the most successful of them being Spring in Moscow by V. M. Gusev, European Chronicle by A. N. Arbuzov, Shadows by M. E. Saltykov-Shchedrin, The Devil’s Own Mill by Y. Drda and I. Stock and The Island of Aphrodite by A. Parnis. During the post-war years a great deal was done for the theatre by B. M. Sushkevich, Y. T. Bublikov, G. P. Korotkevich and the art director of the theatre, I. P. Vladimirov.
The theatre occupies the building of the former Merchants’ Assembly Hall which is a monument of civic architecture of the first half of the 19th century (architect A. A. Mikhailov the second).