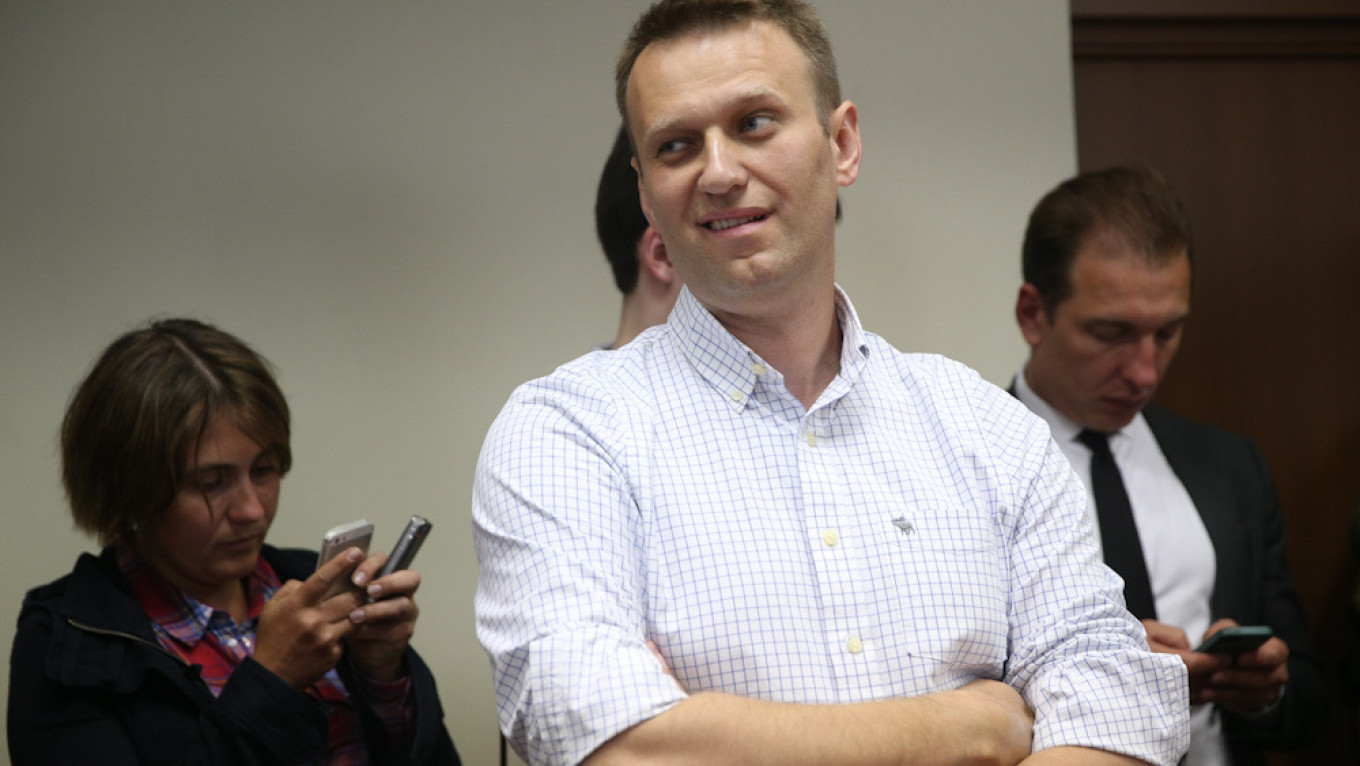 Jailed Kremlin critic Alexei Navalny, who has channeled the frustrations of Russians over the past two weeks to rally tens of thousands to protests across the country, has been on a complex ideological journey throughout his two decades in Russian politics.

Over the course of his political career the 44-year-old activist has been described as a liberal, a libertarian, a nationalist and a populist. As he faces years in prison after a poisoning attack he says was ordered by President Vladimir Putin, commentators agree that his core convictions have always centered around anti-corruption.

But along the way he has also flirted with anti-immigrant nationalism and left-wing populism, constantly tailoring his policy pitch to best fit a changing public mood.

“Navalny is an opportunist,” said Alexander Baunov, a senior fellow at the Moscow Carnegie Center.

“He’s quite open about it. His overriding goal is to build an electoral majority in Russia.”

A teenager in the early nineties, Navalny matured politically in the chaotic years after the collapse of the Soviet Union.

He was an avid supporter of then-President Boris Yeltsin’s radical program of free market reform, despite the widespread economic pain of the “shock therapy” transition to capitalism he advocated.

Years later, in Konstantin Voronkov’s 2011 biography of the opposition leader, Navalny described his younger self as a “market fundamentalist,” who had cheered on Yeltsin’s violent resolution of a standoff with an anti-reformist parliament in October 1993.

However, Navalny’s youthful free market zeal was tempered as the young law graduate took his first steps into the business world.

In his interviews with Voronkov, he speaks of his realization that, in the anarchic and often corrupt nineties when former Soviet functionaries used old contacts to gain overnight riches, financial success depended more on personal connections than on street smarts.

“It became obvious that the only people getting rich were those who, one way or another, were connected to the authorities,” he told Voronkov.

These experiences set the core beliefs that have remained more-or-less consistent in Navalny’s political career since: a commitment to a broadly liberal economic program, and a strong aversion to corruption.

In 1999, Navalny made his first foray into formal politics, joining the centre-left pro-European liberal party, Yabloko.

Though Yabloko had been influential in the 1990s, criticising Yeltsin’s government for its corruption, it collapsed in the 2003 Duma elections, suffering a near wipe-out as its urban, middle class electorate rewarded the Kremlin’s United Russia party for the economic boom and political stability credited to Putin.

According to long-time Navalny watchers, the 2003 defeat — which left the Duma without a significant liberal presence for the first time — was key to his subsequent trajectory, leading him to experiment with new ways to broaden the anti-Kremlin camp’s political appeal.

“He realized that traditional liberalism was not enough to appeal to a majority of the Russian population,” said Ilya Matveev, a political scientist who studies Russia’s modern left at the Russian Presidential Academy of Public Administration in St Petersburg.

This realization set the stage for one of the most controversial episodes in Navalny’s career: his embrace of anti-immigrant nationalist politics.

“Russia for the Russians”

As the Russian economy boomed during Putin’s first stint in office, the country attracted an unprecedented influx of migrant labourers from Central Asia and the Caucasus seeking work in Moscow’s thriving construction and service sectors.

Against the backdrop of mass immigration and a regular drumbeat of Islamist terror attacks linked to the Chechen war, nativist sentiment exploded in the 2000s. Opinion polls showed majority support for “Russia for the Russians,” the trademark slogan of the Russian far right. For Russia’s liberals, decisively locked out of power, opposing immigration seemed a potential way of recouping their previous influence.

“An alliance with the nationalists seemed to many opposition figures the best way to build an anti-Kremlin coalition,” said Carnegie’s Baunov.

While Navalny — who in 2007 was expelled from Yabloko for attending a banned Moscow rally of far-right nationalists — was not the only liberal opposition figure to publicly flirt with nationalism, his embrace of anti-immigrant xenophobia was strident.

In a YouTube skit from this period, Navalny plays a pest control specialist, advising his audience on how to rid themselves of immigrants from Russia’s mostly Muslim North Caucasus, whom he compares to flies and cockroaches.

At the same time, Navalny adopted an aggressively expansionist foreign policy, advocating the annexation of pro-Russian breakaway regions in Georgia and Moldova, and for the integration of Belarus and Ukraine with Russia.

“At the time, Navalny thought that nationalism was a good way to get noticed,” said Matveev.

By the early 2010s, however, Navalny had begun to distance himself from nationalism. Campaigning in 2013 for the Moscow mayoralty, he advocated ending visa-free access for Central Asian migrants, but dropped the crude racism of his earlier years.

Though his 2018 presidential platform contained no mention of immigration and presented plans for friendly relations with Europe, America and Ukraine, Navalny has never explicitly renounced his earlier nationalism.

As late as 2020, interviewed by Der Spiegel while recovering in a Berlin clinic, the opposition leader declined to renounce his earlier stances, saying that he holds the same views as he did when he first entered politics.

“After the end of the oil boom, immigration decreased and lost importance as an issue,” said Baunov.

“It made sense for Navalny to move away from nationalism.”

A sea change in Russian politics after 2014 — as Western sanctions after the annexation of Crimea brought Russia’s economy to a standstill — forced yet another shift in Navalny’s political positioning.

Where immigration had loomed large during the boom years, polling showed that worries about the economy and inequality were coming to the fore.

Navalny began to focus on his old bugbear of official corruption. Having risen to national prominence by dubbing United Russia “the party of crooks and thieves” in 2011, he investigated graft involving state-owned companies and the political elite. His documentaries charging then-prime-minister Dmitry Medvedev and Putin himself with corruption gained millions of views on YouTube.

This opposition to corruption became a unifying theme for Navalny’s political platform.

His manifesto for the 2018 presidential election — produced before he was barred from running for office — straddles left and right, advocating conventionally pro-business economic policy, including tax cuts and reduced regulation, while also supporting a higher minimum wage and signalling openness to a universal basic income, all framed as a means to fight corruption.

More recently, with issues such as the Kremlin’s highly unpopular 2018 decision to raise the pension age drawing attention, Navalny’s movement has tacked leftwards, experimenting with labour activism, seeking to appeal to disillusioned Russians by urging the redistribution of industries privatized in the 1990s and attacking Putin as a product of that era’s corrupt politics.

“[Navalny] has indeed moved substantially to the left,” said Sergei Guriev, a professor of economics at Sciences Po in Paris, who has served as an economics advisor to Navalny.

“He understood that fighting poverty and inequality of opportunity is the top economic priority.”

Shift to the left

However, Navalny’s newfound focus on exposing the abuses of Russia’s business elite does not equate to a coherent left-wing program, or to a general antipathy for private enterprise.

“Navalny is staunchly against corruption, but not against the capitalist economic system,” said Matveev, of the Russian Presidential Academy. “He distinguishes between ‘good’ and ‘bad’ rich people.”

This distinction remains evident in the opposition leader’s brains trust, where he is advised on economic policy by a number of entrepreneurs and free market economists, including the founders of successful Moscow restaurants and e-commerce companies, and most of whom advocate broadly pro-business policies.

For Matveev, this reliance on advisers who, despite Navalny’s shift towards populist economics, lean towards the same market-oriented policies Navalny himself increasingly criticises, speaks to his movement’s continued ideological incoherence.

“Navalny is a paradox,” said Matveev. “It’s an open question what to expect if he ever came to power.”

“At the same time, his views may be flexible, but he does genuinely believe that Russia’s status quo is unfair for the majority of the country. He has shown that he is willing to go to jail for this.”