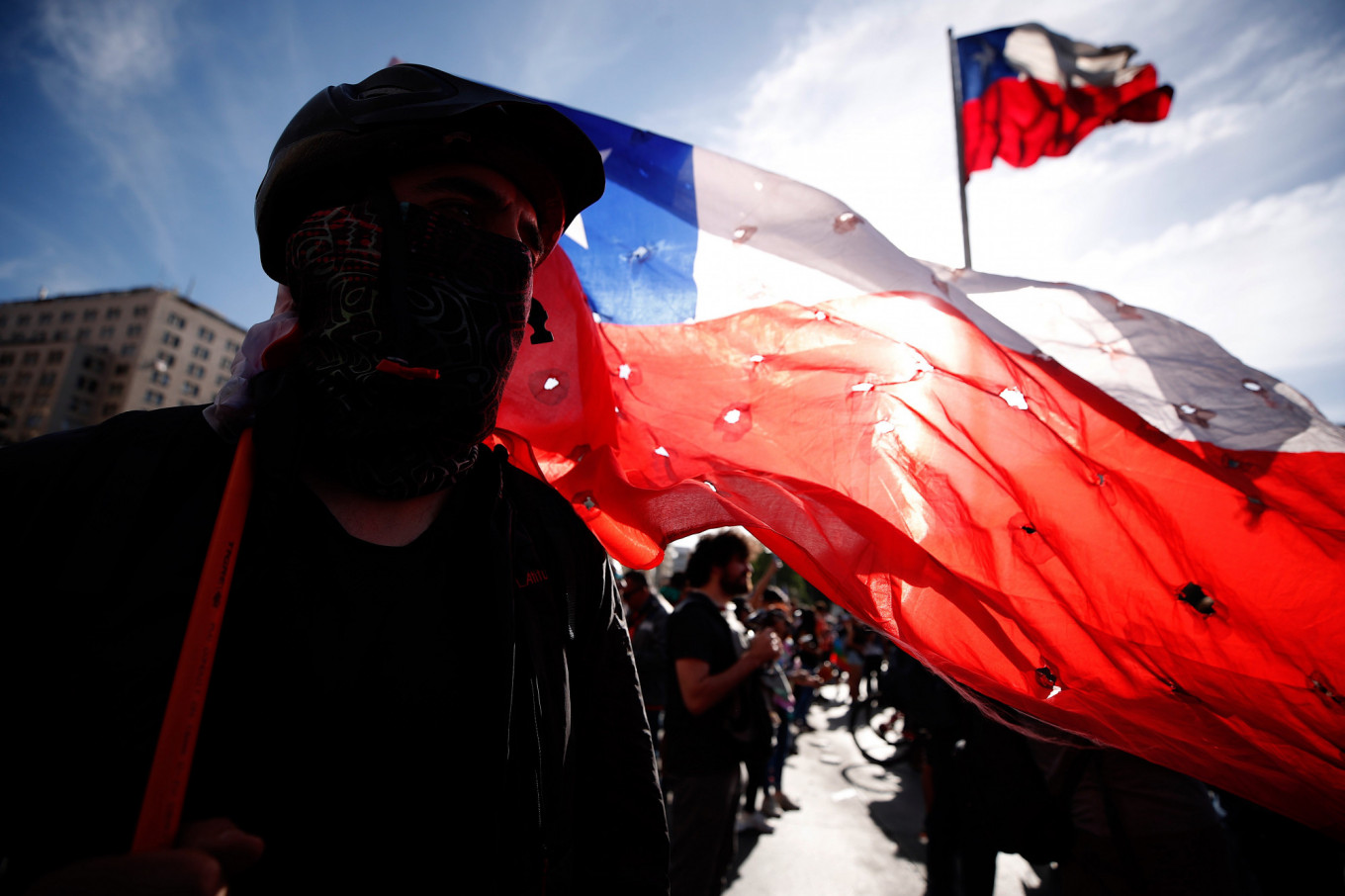 The U.S. State Department warned on Thursday that it had seen indications of Russian “influence” on recent unrest in Chile, where two weeks of protests and riots have rocked the administration of President Sebastian Pinera.

A senior State Department official said there were “clear indications” people were taking advantage of the unrest in Chile — prompted by inequality and rising living costs — and “skewing it through the use and abuse of social media, trolling.”

“We have seen indications of Russian activity supporting this negative course of the debate,” the official said.

Chilean officials did not immediately comment on the remarks. Russia has previously said it does not interfere in other countries’ internal affairs.

Chile has been mired in chaos over the last two weeks, which led center-right Pinera on Wednesday to abruptly withdraw Chile as host of an upcoming APEC summit and a major climate change conference, to “take care of problems at home.”

Trump, who had been expected to sign a trade deal with Chinese counterpart Xi Jinping at the APEC meeting in Santiago in November, said on Thursday he supported Pinera’s decision to back out of hosting the trade and climate change conferences.

The State Department official said that foreign interference was not the only trigger for the recent violence, which has seen buses and buildings burned, Santiago’s metro system shut down, and much of the city at times grind to a halt.

But he added that Russia had “sought to exacerbate divisions, foment conflict and all round act as spoiler to responsible democratic debate.”

Protests over a hike in metro fares spun out of control across Chile nearly two weeks ago. Riots, arson and looting have since left at least 18 dead and led to the arrest of 7,000, prosecutors said. Chilean businesses have lost more than $1.4 billion.

Pinera, a billionaire businessman, has scrambled to react to the unrest, pledging worker-friendly economic reforms and reshuffling about one-third of his cabinet. But opposition lawmakers that met with members of Pinera’s cabinet at the La Moneda presidential palace on Thursday said it was not enough.

The leftist opposition called on the president to scrap Chile’s existing constitution and draft a more worker-friendly one, warning that without major action Pinera would not successfully quell the protests.

“We are going to continue to insist on a new constitution until we are heard,” said Fuad Chahin, head of the centrist Christian Democratic (DC) party.

Socialist Party head Alvaro Elizalde said Pinera was “not listening to the demands of citizens.” He called the existing constitution, adopted during the 1973-1990 military dictatorship of Augusto Pinochet, a “straight-jacket” that had condemned Chile to poverty and inequality.

Pinera’s predecessor, Michelle Bachelet, had promised to change the constitution, but ultimately failed in the teeth of right-wing opposition and a crowded legislative calendar.

Newly appointed interior minister Gonzalo Blumel said Pinera’s government had not ruled out “structural reforms,” without elaborating on what they might be.

Pinera’s abrupt move to cancel both the Asia-Pacific Economic Cooperation meeting and December’s high-profile COP25 climate change summit caught much of the world off-guard. Officials from both conferences have been scrambling to find new venues.

Hotels, restaurants and transport and tourism services in Chile all braced for impact.

“The cancellations have hit us hard,” said a desk attendant at a major international hotel chain in Santiago who asked not to be identified. “A delegation from APEC… had reserved 100 of the 280 rooms we have at the hotel.”

Santiago’s metro system, once the envy of Latin America, sustained at least $400 million in damage in past weeks. Rioters set fire to 21 metro stations, burned seven trains, and attacked more than 2,000 buses. One hundred stoplights are destroyed each day, officials said.

The number of protesters has fallen sharply since last Friday, when more than 1 million Chileans marched on Santiago. But violence, looting, arson and skirmishes with police continue.

In Santiago’s central Plaza Italia on Thursday, mounds of rubble, trash, broken glass and smoldering fires littered streets and sidewalks, even as new protesters began to gather by early evening.

Cristian Bigorra, a 64-year old who attends a parking garage nearby, said both politicians and violent protesters were to blame for the still simmering chaos.

“Words can’t describe what they’ve done to this city,” said Bigorra. But, he added, Pinera had “done nothing” to change things even as violence had mounted.

A team of United Nations human rights officials arrived in Chile on Tuesday to scrutinize allegations of excessive use of force, torture, sexual assault and deaths at the hands of security forces during the recent unrest.

Pinera on Wednesday said he welcomed the scrutiny and said the country had “nothing to hide.”

U.S. Vows to Prevent Any Russian Invasion of Ukraine
December 4, 2021