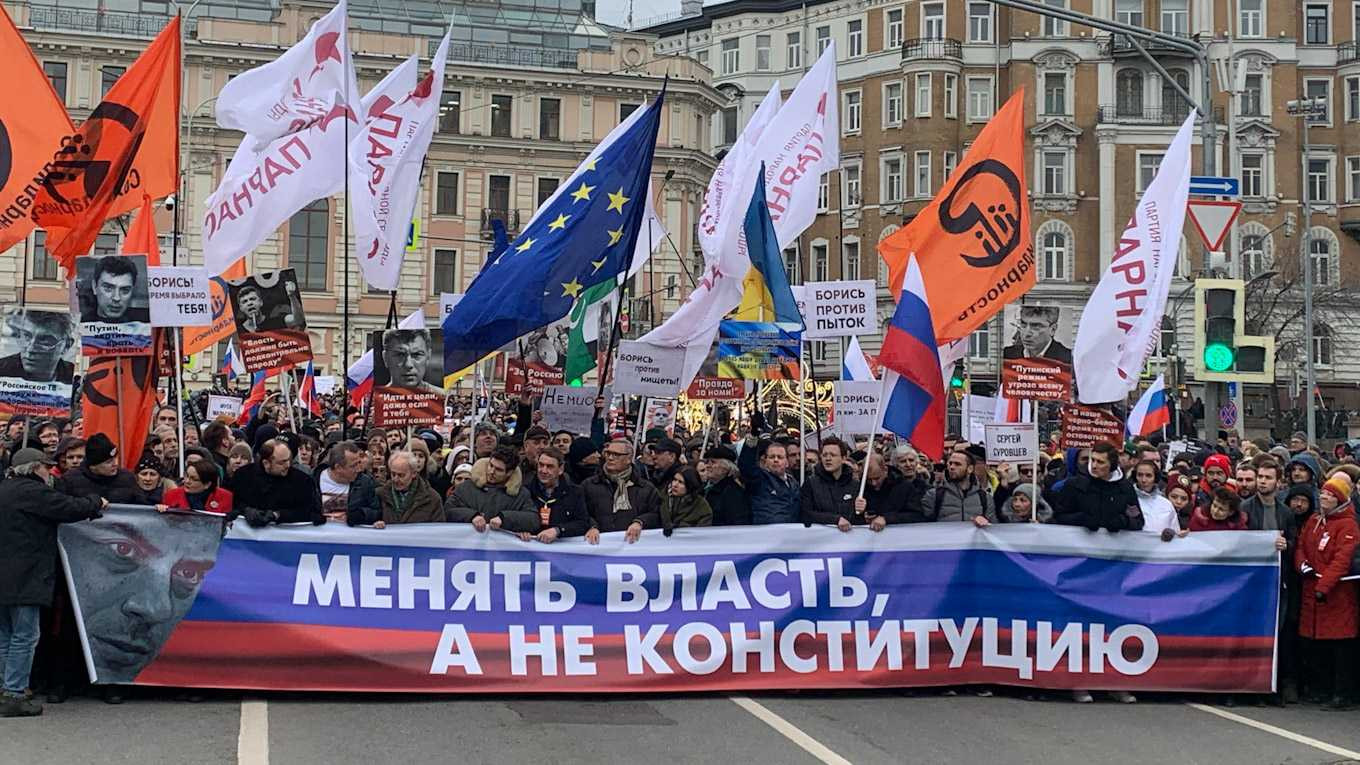 In what has become an annual Russian tradition, thousands rallied across the country on Saturday to march for Boris Nemtsov, a key opposition figure shot and killed five years ago this month on a Moscow bridge just steps from the Kremlin.

While the killer has been found guilty and sentenced to prison, Nemtsov’s family and allies claim that the authorities have neglected to bring the masterminds to justice. Activists say they will continue marching every year until those responsible are found and prosecuted.

Each year, however, new indignities pile up — and the march, which is approved by the authorities, has become a platform for the beleaguered Russian opposition to express all that is irritating it.

“We must fight to ensure that there are no contract killings and torture in our country, that the police are honest, that the courts are impartial and that punishment for committing a crime is inevitable,” Russia’s main opposition critic Alexei Navalny wrote on Facebook in a call for people to attend the march.

The weeks leading up to this year’s event offered much for the opposition to be dissatisfied about. Among the most prominent affronts was what critics are calling a “constitutional coup.”

During his annual state-of-the-nation address in mid-January, President Vladimir Putin proposed a raft of constitutional amendments that critics said could allow him to stay in power beyond the end of his term in 2024. This week a lawmaker announced that Putin had agreed to a nationwide vote on the amendments on April 22.

Observers have argued that among Putin’s proposed changes to the 1993 document, some would strengthen parliament and other government bodies. Analysts say the Russian leader appears to be keeping various doors open for a new position after he leaves the Kremlin.

Organizers of the Nemtsov march used the upcoming vote on the constitutional changes as a call to action.

“There are moments when you can’t sit at home,” opposition politician Ilya Yashin said in a video address. “Putin should not rule forever. It’s time to remind him of that.”

According to White Counter, an NGO that tallies up participants who have passed through the security frames surrounding approved rallies, 22,300 people attended the headliner in the Russian capital — more than doubling the count at last year’s rally. Interior Ministry estimates cited by Interfax put the number of participants in Moscow at 10,500. Marches also took place in other large cities including Yekaterinburg and St. Petersburg, where six of the 2,000 demonstrators were detained.

“This will perhaps be the most important opposition rally in recent years,” Yashin predicted.

At the rally, marchers chanted “Russia without Putin” and carried posters saying “no to constitutional usurpation.” They also unfurled a banner reading “change power not the constitution.”

But among the crowd, there was also a sense of resignation.

“I’m not exactly sure what these changes are, but I’m positive they’re so the authorities can stay in power,” said Filip Kazakov, a 34-year-old small business owner. “I don’t think there’s much we can do about it. What’s important is that we remind those in power that dissenting voices exist.”

According to a survey published by the independent Levada Center pollster on the eve of the Nemtsov march, a quarter of voters will support the constitutional proposals, while 56% said they did not understand why the changes are needed.

“There’s nothing in the amendments that can explicitly trigger outrage,” said political scientist Yekaterina Schulmann. “If it was clearly written that two-term limits for presidents would be cancelled then maybe you could inspire civil society protest. But it’s hard for people to look at the changes and point out what’s wrong specifically with them.”

Navalny, notably, avoided mentioning the constitutional changes in his call for people to attend the march. Earlier, he had called for a wait-and-see approach.

“Putin surprised the opposition,” said political analyst Gleb Pavlovsky. “They weren’t ready for his move and their response has been feeble.”

On Saturday, though, there were other indignities to rally around.

Putin’s Changes Might Set Russia on the Right Path

Earlier this month, a court in central Russia jailed seven members of the anti-fascist activist group Set — or Network — to prison terms between six and 18 years. The jailed activists had accused security officers of torturing them into incriminating themselves, allegations which Russia’s Federal Security Service (FSB) called a “professional necessity.” At the rally, marchers called for the activists to be released.

And on Thursday, on the anniversary of Nemtsov’s murder, Putin handed an award to Chechen lawmaker Suleiman Geremeyev, the uncle of Ruslan Geremeyev, one of the alleged organizers of the shooting. Opposition activists saw the move as a slap in the face.

The rally was also the first protest gathering in the Russian capital since the wave of protests last summer for fair elections that left a number of activists facing years behind bars, including Konstantin Kotov, who was handed a four-year prison sentence for attending multiple rallies unsanctioned by the authorities. On Saturday, marchers carried signs calling for their freedom.

“This has become an event for us to express our united dissatisfaction,” said Sergei Stenken, a 46-year-old systems administrator. “A lot has happened over the past year and this is the time to show that we aren’t ignoring it.”