Volgograd — One of the Biggest Cities of the Russia 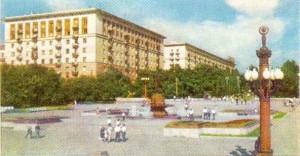 Volgograd — One of the Biggest Cities of the Russia
After the rout of the Hitlerite hordes at the walls of the Volga bastion, the city lay in ruins. Stalingrad was called “a city without addresses” then — 85 per cent of all the dwelling houses were destroyed.
But thanks to the selfless labour of the Russian people the city was raised from the ruins in an incredibly short time. Hundred of buildings, broad thoroughfares, factories and plants appeared on the banks of the Volga again, and the gardens, playgrounds, streets and schools are full of children’s ringing voices.
Now Volgograd is one of the biggest cities of the Russia with a population of more than 700,000.
Its industrial output today is five times the 1940 figure.
The city has about 150 factories and plants. The products made in Volgograd are known not only in the Russia but far beyond its limits as well. Volgograd tractors, drilling rigs, tankers, oil products, steel, rolled stock, aluminium and medical equipment are exported to 32 countries of the world. Heavy industry is responsible for almost 90 per cent of the city’s total industrial output.
Situated in the northern outskirts of the city is the Volga Hydroelectric Power Station named after the 22nd CPSU Congress. This is one of the world’s biggest hydroelectric power stations.
The station generates an average of 11.5 thousand million kWh a year, that is six times more than all the electric stations of Russia did in 1913.
In the northern part of Volgograd is the city’s biggest enterprise — the Tractor Plant. Right next to it is the Krasny Oktvabr Metallurgical Plant. The Shipyards is one of the city’s leading industrial enterprises.
Volgograd is a big centre of the sawing and woodworking industry supplying timber to the mines of the Donbas, railway transport and other branches of the national economy.
The Volgo-Don Canal named after V. I. Lenin begins in the southern part of the city. After the construction of that canal the Volga ships received an outlet to the sea of Azov and the Black Sea. apart from the Caspian Sea. while the Volgo-Balt canal gave them an outlet to the Baltic sea.
Today one can see the latest diesel-electric ships and hydrofoils on the waterways connecting Volgograd with Astrakhan and Rostov-on-Don.