What We Know About the Deadly Aeroflot Superjet Crash Landing Forty-one people on board a Russian Aeroflot passenger plane, including at least one child, were killed after the aircraft caught fire during a bumpy emergency landing at Moscow’s Sheremetyevo Airport Sunday.

Russia’s Investigative Committee said it had opened a criminal case and was looking into whether the pilots had violated air safety rules.

Television footage showed the Sukhoi Superjet 100 crash bouncing along the tarmac before the rear part of the plane burst into flames. Many passengers onboard SU 1492 then escaped via the plane’s emergency slides that inflated after the hard landing.

— The plane, flying from Moscow to the northern Russian city of Murmansk, had been carrying 73 passengers and five crew members, Russia’s national aviation watchdog said.

— The pilots requested to turn back shortly after taking off at 6:03 p.m. Moscow time. Radio traffic reportedly died after unconfirmed reports that the plane was hit by lightning. The Flightradar24 tracking service showed the plane had circled twice over Moscow before landing after just under 30 minutes in the air.

— Only 37 out of 78 people on board had survived, Russia’s Investigative Committee said in a statement, meaning 41 people had lost their lives. Aeroflot said the Superjet’s engines caught fire after landing.

— Some passengers delayed the evacuation process by attempting to remove their carry-on luggage from the overhead compartments, preventing passengers near the tail end from escaping, a source with knowledge told Interfax.

— No official cause has been given for the disaster. Investigators say they are considering several leads, including insufficient qualifications of the pilots, air traffic controllers or aircraft inspectors; technical malfunctions; and poor weather conditions.

— Authorities are considering equipment failure from a lightning strike as the primary cause of the disaster, an unnamed source with knowledge of the incident told Interfax on Monday. Emergency officials had issued a storm warning in parts of Moscow for Sunday afternoon and evening.

Flights delayed and rerouted from Sheremetyevo

— More than 40 flights have been rerouted to neighboring airports as of Monday morning, most of them to Moscow’s Domodedovo airport, Interfax reported.

— Sheremetyevo continues to operate on a single runway 18 hours after the disaster.

— The airport’s online table shows several delays and cancellations for both domestic and international arrivals. Only one departing flight has been canceled.

— Valery Postnikov, director of the Society for Independent Accident Investigations:

“There are not enough of them [Sukhoi Superjet aircrafts] to talk about their reputation. If I am not mistaken, there are a little more than 100 of them in use now. Until yesterday, there was only one disaster in Indonesia [in 2012]. No one has determined exactly why yesterday’s crash happened yet. I wouldn’t rule out the pilot’s error as a cause. The problem was definitely not related to the aircraft itself. The problem is [likely] related to the organization of after-sale service, air traffic communication, whether there was a prediction and whether there was danger from a thunderstorm. I think this catastrophe may affect Aeroflot, but not the Sukhoi Superjet, at least for now.”

“The plane is good, pilots praise this plane. There are failures we cannot predict. In this case, it has nothing to do with the aircraft itself. [The Sukhoi Superjet] has problems, just like all young aircrafts do. But the problem is with the organization around these aircrafts, and something must be done about it. Any crash is bad both for the company and for the aircraft. But what can we do? We will continue to fly and live.”

“Aeroflot is recognized as a top company and the Sukhoi Superjet is recognized as a terrific airplane. The plane itself is certified by many organizations; it has a very good reputation. This is [the Sukhoi Superjet]’s first accident during commercial use. It is an extraordinary tragedy. It could take weeks before we understand what happened. The pilots did a terrific job. The passengers’ videos taken inside the plane could have slowed down the evacuation process and many passengers could have lost their lives because of that – but we do not know. I think there will be an impact [on the company] but international travelers will continue to use Aeroflot, it is a very good airline.” 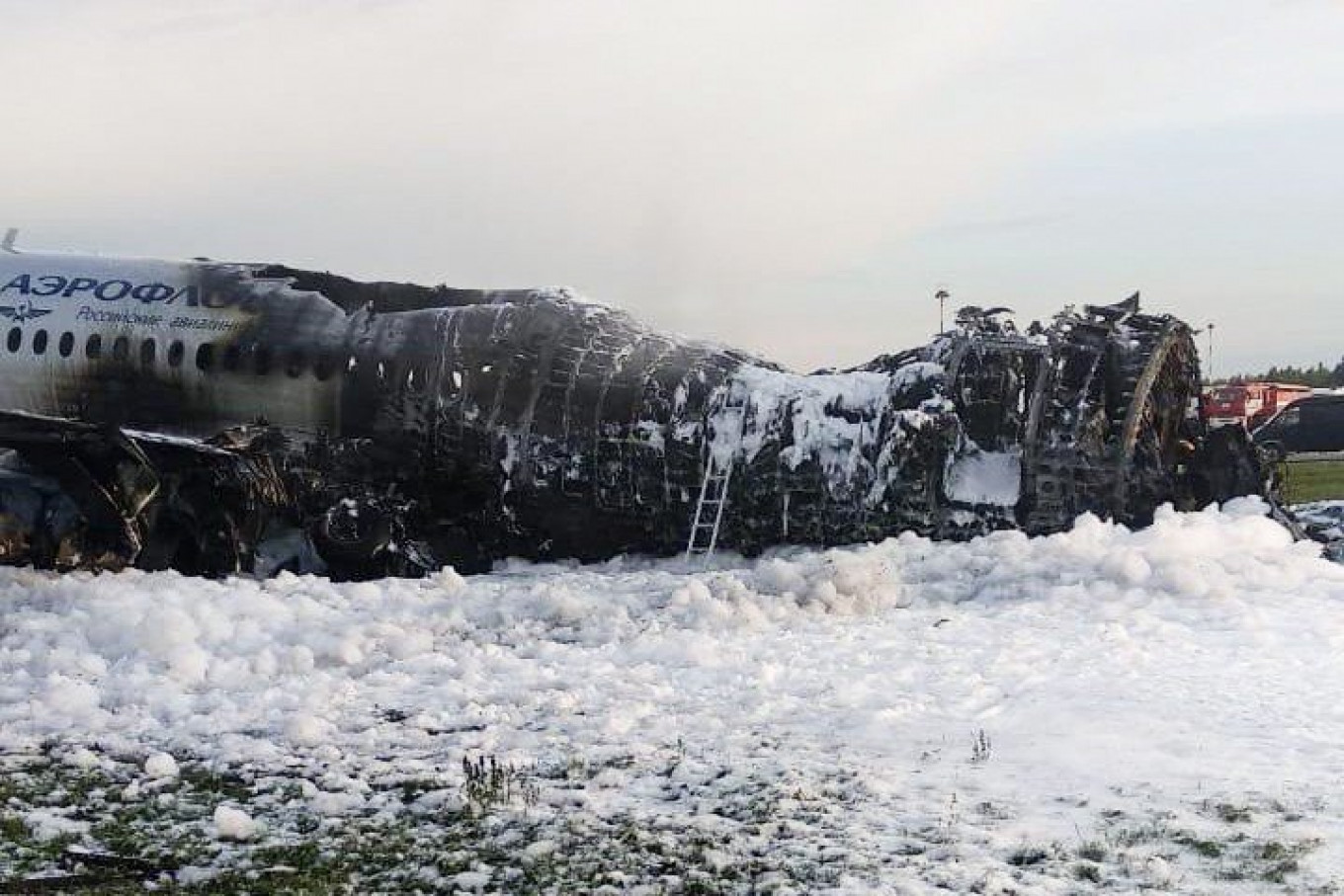 — Sunday’s disaster is the first major deadly incident for Aeroflot since 2008, when 88 passengers and crew were killed after its Boeing 737 caught fire and crashed in Perm.

— The Superjet entered service in 2011 and was the first new passenger jet developed in Russia since the fall of the Soviet Union. It has been hit, however, by sporadic concerns over safety and reliability, including a December 2016 grounding after a defect was discovered in an aircraft’s tail section. Another Superjet 100 was decommissioned after it rolled off the runway in Russia’s Far East republic of Sakha in October 2018.

— During a demonstration flight to woo potential buyers in Indonesia on May 9, 2012, an experienced Russian pilot lowered altitude and hit the side of a mountain. Information recovered from the Sukhoi Superjet 100’s cockpit voice recorder and flight data recorder indicated that the pilot in command was chatting with a potential buyer in the cockpit just before the plane slammed into Mount Salak.

— The burned-down aircraft itself previously suffered a malfunction when its flaps failed to open on landing in January 2018, an unnamed aviation industry source told the Kommersant business daily.