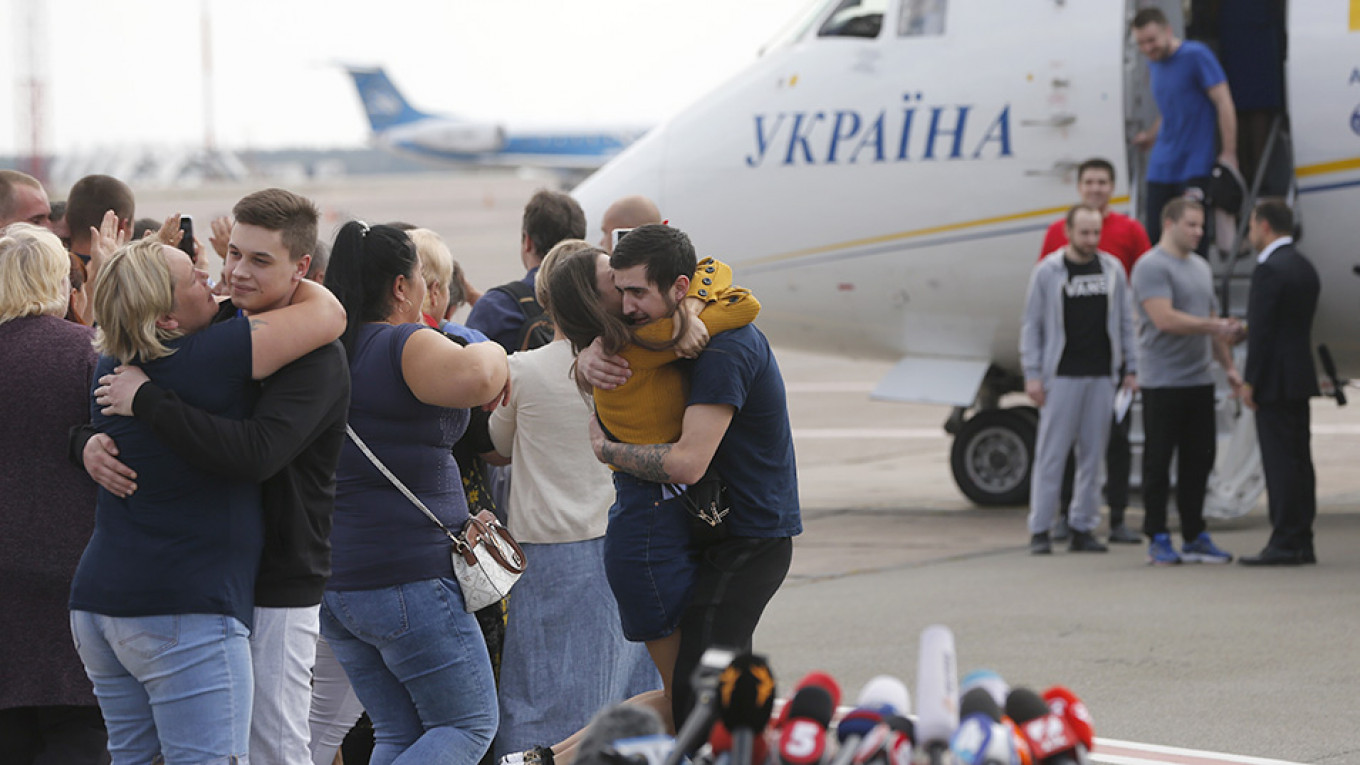 Russia and Ukraine on Saturday exchanged 35 prisoners each in a carefully negotiated swap that could signal a thaw in relations.

The swap — which included high-profile figures like filmmaker Oleg Sentsov and potential MH17 witness Vladimir Tsemakh — was seen as a key step toward resolving the conflict in eastern Ukraine that has claimed more than 13,000 lives since it broke out in 2014.

Russian President Vladimir Putin and Ukrainian President Volodymyr Zelenskiy made a positive assessment of the swap when discussing it by phone on Saturday and agreed on further contacts, the Kremlin has said. U.S. President Donald Trump congratulated both countries, tweeting Saturday that the move was “perhaps a first giant step to peace.”

Unlike Zelenskiy, whose administration has publicized all 35 people who were released to Ukraine, the Kremlin has declined to list the names of the 35 people that Russia received as part of the exchange. Some of the prisoners given to Russia have been separately confirmed.

Here’s who Russia handed over to Ukraine:

A native Crimean, Sentsov was sentenced to 20 years in a remote Arctic prison in 2015 after being convicted of terrorism following Russia’s annexation of Crimea in 2014.

Sentsov was detained and accused of plotting terrorist acts in May 2014 alongside three other activists: Gennady Afanasyev, Alexei Chirniy and Alexander Kolchenko. Sentsov said there was no evidence to back up the claims, while Russian human rights activists and much of the West said the charges of terrorism were politically motivated.

In 2018, Sentsov began a hunger strike to stir an international outcry ahead of the FIFA World Cup that Russia hosted; the strike lasted for 145 days. In October, the European Parliament awarded him the Sakharov Prize for Freedom of Thought.

The Russian Navy captured 24 Ukrainian sailors and their three vessels in the Kerch Strait, which links the Black Sea and the Sea of Azov, in November 2018 after opening fire on them. Moscow accused them of illegally entering Russian waters, an accusation Kiev denies.

In May, the Hamburg-based International Tribunal for the Law of the Sea (ITLOS) called on Moscow to release the sailors immediately, a call the Kremlin rebuffed.

Here’s who Ukraine handed over to Russia:

Vyshinsky was arrested in May 2018 and accused of supporting pro-Russian separatists, facing up to 15 years in Ukrainian jail if convicted. Russia has said the case against Vyshinsky was a trumped-up and politically motivated attack on Russian media in Ukraine.

A court in Ukraine ordered Vyshinsky to be freed on bail and released from custody last month amid behind-the-scenes prisoner swap talks between Moscow and Kiev.

On Monday, Vyshinsky told reporters in Moscow that Russia’s human rights chief had talked him into postponing his original late-August flight from Kiev and joining the rest of the prisoners due to be exchanged instead.

Tsemakh, a Ukrainian citizen, was arrested by Ukrainian authorities in June 2019 and faced prison time for fighting on the side of pro-Russian rebels in eastern Ukraine.

He had been recorded on video saying that he commanded an anti-air brigade in eastern Ukraine and hid evidence of a Buk missile system, leading observers to speculate that Tsemakh may have been a key witness in the downing of Malaysia Airlines flight MH17 in 2014. Dutch investigators say separatist fighters used a Russian-made Buk missile to shoot down MH17, killing all 298 people on board, most of whom were Dutch civilians.

A Kiev appeals court ruled to release Tsemakh from custody two days ahead of the high-profile prisoner exchange last week.

The Dutch government has said it “seriously regrets” that Tsemakh was included in this prisoner swap “under pressure” from Russia, but added that Dutch prosecutors did get a chance to question Tsemakh before his release.