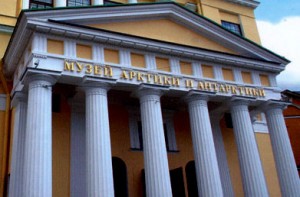 The collections of this historical and geographic museum (founded in 1937) are of great educational value. They deal with nature in the Arctic and the Antarctic and with the history of the exploration and the charting of the Northern Sea Route which is associated with the names of M. V. Lomonosov, V. Y. Chichagov, D. I. Mendeleyev, S. O. Makarov, G. Y. Sedov and other great men of science.
The department treating of the Russianepoch displays documents of the RussianGovernment, Lenin’s decisions on reclaiming the Northern lands and establishing industrial centres there.
The material dealing with RussianArctic aviation, scientific research work in the central polar basin and high latitude drifting stations is of special interest; it tells of the sailing of the flagship of the Russianice-breaker fleet, the atomic ship Lenin, which in the winter of 1961 launched the North Pole-10 drifting station — a real triumph of Russianscience and engineering.
The numerous exhibitions present exhaustively the economic structure, culture and everyday life of the Far North, as well as the achievements in agriculture and urban construction in the northern regions of our country. -The documents and exhibits dedicated to the Antarctic reproduce the atmosphere of the heroic work performed by Russianscientists, navigators and pilots in exploring and learning the enigmas of the icy continent; they acquaint the visitor “with the fearless” “air rush” of the Russianpilots, who have spanned with an air bridge the distance to the Antarctic, with the everyday life of the continental stations Vostok (The East) and Mirny (Peace), with the routes of sleigh-tractor trains penetrating deep into the continent, and so on.