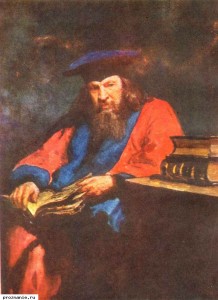 The museum is functioning at the Ail-Union Vletrological Research Institute where exact specimens of the standard units of measurement are kept. The Institute bears the name of its founder, D. I. Mendeleyev, who designed and supervised the construction of the building. The great scientist worked as Director of the Main Chamber of Weights and Measures which was opened here ir 1893. He lived in the apartment on the premises of the Chamber from 1897 till January 20, 1907, the day of his death.
In 1931 a monument to the scientist was set up in the garden of the Institute by the sculptor I. Y. Gintsburg. On the wall of the adjoining building there is a huge table of the Periodic System of the Elements — the great discovery of D. I. Mendeleyev (the design of the table is by the architect D. L. Krychevsky).
In 1928 a Memorial museum was opened in Mendeleyev’s study, and in 1959 it was transferred to the apartment in the Main Chamber of Weights and Measures where his own chemical laboratory, study and bedroom used to be.
The exhibition of the museum is dedicated to Mendeleyev’s life and work. The furnishings of the study have been carefully preserved, old and new standard units of mass, length and time as well as various other measuring instruments, are displayed here. The museum shows a new table of the Periodic System including element 101 which, in honour of the great chemist, was called ‘mendelevium’.