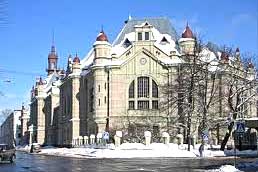 This is the oldest institution of higher learning in the field of comprehensive electrical engineering. It was founded in 1886.
At the end of 1905, V. I. Lenin visited the hostel of the Institute on several occasions. At the meetings held by the students’ Bolshevist circle V. I. Lenin talked on Marxist philosophy and current political problems.
The great scientist A. S. Popov, the inventor of radio, lived and worked here for several years; he died here in 1905.
It was here, too, that prominent scientists of our country—Academicians G. O. Giaftio, V. M. Shuleykin, A. A. Chernishev, V. A. Vvedensky, I. V. Grebenshchikov — delivered lectures.
Professor Popov street 5, SaintPetersburg, 197376, Russia