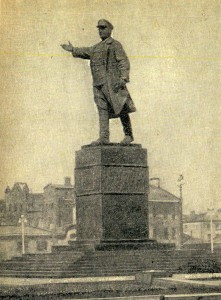 Well-built new districts with gardens, quares and monuments have appeared in the former working-class suburbs of the city. The statue of S. M. Kirov seems to welcome the new Socialist Ndrvskaya Zastava.

The square bearing the name of S. M. Kirov, the ardent tribune of the Revolution, is surrounded by the numberless blocks of the new RussianNarvskaya Zastava. In the centre of the square rises an impressive-looking monument to S. M. Kirov. With his sweeping gesture and friendly smile Kirov seems to be greeting Saint Petersburgers — the workers of the Narvskaya Zastava, for the development of which he had given so much energy and talent. Designed by the sculptor N. V. Tomsky, the monument was set up in 1938. The more arresting of the structures forming the square are the building of the Executive Committee of the District Russianwith its eleven-storey-high tower silhouetted against the sky (by the architect N. A. Trotsky) and a number of dwelling houses which sprang up in the post-war years.