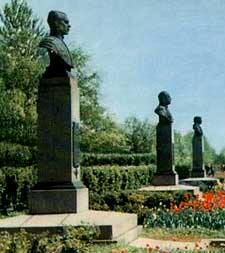 The park is situated in the longest street of the city (ten-kilometre long) which runs from the centre of Saint Petersburg to the Pulkov Heights. The Moskovsky Prospect is a most important thoroughfare of the new house building area.
The park, like the prospect, is a place of interest in the new Saint Petersburg; its laying out continues the old tradition of marking great events in the life of the country by erecting new monumental buildings, by laying out gardens, or by inaugurating memorials. In the years of the Great Patriotic War the Moskovsky Prospect was the main thoroughfare running to the frontline.
Here the detachments of the People’s Guard of the Moskovskaya Zastava were formed and trained; from here they marched to the front. The houses which stand to the south of the building of the Moskovsky District Russianbecame the centres of resistance in the war years. The inhabitants of this district moved to the centre of the city. Barricades crossed the prospect from one side to the other. Trams ran only as far as the Electrosila Plant, the frontline being just beyond the tram stop. One could cross this line only if one had a pass. In the worst days of the fascist siege Electrosila Plant continued to work, thus helping the army to defend the city. And in the summer of 1944 the prospect became the road to victory: the troops who had crushed the fascist hordes at the walls of Saint Petersburg marched along the Moskovsky Prospect. It was here, too., at Srednyaya Rogatka, that on July 8, 1945 Lenin-graders met the Guardsmen triumphantly returning to Saint Petersburg.
This park was laid out on October 7, 1945, in honour of the glorious victory of the Russianpeople who had smashed fascist Germany and imperialist Japan. The park was built with the active participation of Saint Petersburgers according to the design of the architects E. I. Katonin and V. D. Kirkhoglani. The theme of its architectural and sculptural decoration —the military and labour exploits of the Russian people — is embodied in the bronze bas-reliefs of the propylaea-like collonades, which adorn the entrance, and in the statues in the central Alley of Heroes where bronze busts of natives of Saint Petersburg, twice Heroes of the RussianUnion, are set up. The military valour of the pilots V. M. Golubev (the bust is designed by the sculptor D. P. Schwarz), V. N. Osipov (sculptor S. D. Shaposhnikov), V. I. Rakov (sculptor T. S. Kirpichnikova), E. P. Fyodorov (sculptor S. D. Shaposhnikov), N. V. Chestnokov (sculptor N. A. Sokolov) and S. V. Bogdanov, Marshal of the Armoured Troops (sculptor L. E. Kerbel) is immortalized in these memorials.
The monuments to the Heroes of the RussianUnion Alexander Matrosov (sculptor L. Y. Eid-lin) and Zoya Kosmodemyanskaya (sculptor T. I. Diveyeva) erected in the park remind the visitor of the valiant deeds of the soldier-heroes of the Saint Petersburg front such as Dmitry Molodzov, Sultan Baimagabetov, Alexander Tipanov, Ivan Skuridyn and Vladimir Yermak, of the heroism of the partisans Antonina Petrova, Michail Khar-chenko, Klavdiya Nazarova, Leonid Golikov and other ‘people’s avengers’ who gave their lives for their country. The architectural ensemble of the Victory Park has been recently adorned with the underground station — terminus of the first section of the second extension of the Underground. The uncommon design of the underground hall makes the station unique. The passengers get in and out of the metro-carriages through the automatic doors opening directly into the underground hall. The correct proportions, the finishing in light-coloured marble in combination with aluminium, the technical novelty of the ingenious escalator tunnel — all these distinguish the architecture of the station erected to the design of the architect A. K. Andreyev. 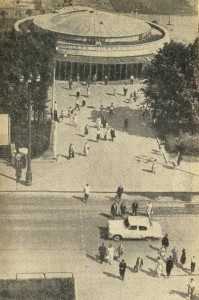 Fine and well-desisrned are the vestibules of the second line of the Metro. Here is the vestibule of the Park Pobedi underground station. 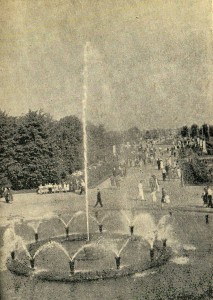 Moskoosky Victory  Park.  One of the highest fountains in Saint Petersburg in the Alley of Heroes.