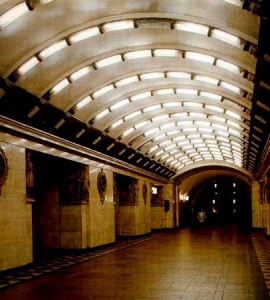 The ground-level vestibule of the station faces Ploshchad Stachek and the Prospect Stachek. This former workers’ suburb has now become a most important construction site of the socialist city; it has been completely transformed in the course of the past four decades.
The heroic revolutionary deeds and glorious exploits in labour of the workers of the Narvskaya Zastava have been embodied in the aspect of the underground palace; its architectural and sculptural decoration is dedicated to the peaceful labour of the Russianpeople. The station was built according to the design submitted by A. V. Vasilyev, D. S. Goldgor and S. B. Speransky.