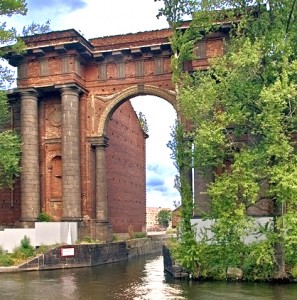 The complex of former warehouses for the storing and drying of ship-building timber, called New Holland, is a fine monument of industrial architecture of the 18th century. It was designed and built by S. I. Chevakinsky and J. B. Vallin-Delamothe in 1765—1780. The splendid monumental portal and arch are of particular interest. New Holland Island reminds us of certain events of the Great October Revolution. On October 27, 1917, V. I. Lenin came to the radio station, situated here, and wrote a message calling on all revolutionary soldiers and sailors to elect representatives and begin negotiations for the cessation of the imperialist war immediately. The proclamation was broadcast in Lenin’s presence.