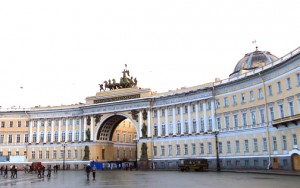 This is the central square of Saint Petersburg and one of the most beautiful squares in the world. The scene of traditional festive demonstrations and rallies, the square witnessed great historical events in Russia. It was here that on Januarv 9, 1905, by order of the tsar a peaceful working people’s demonstration, which was marching to the palace to submit a petition to the tsar, was shot down. The Bloody Sunday was the beginning of the first Russian Revolution. In the historic days of October 1917 the armed uprising of the revolutionary Petrograd was brought to a triumphant end in the Palace Square. At ten minutes past two on the morning of October 26, workers, sailors and soldiers attacked and seized the Winter Palace, the residence of the Provisional Government.
On October 27—28, 1917, at the Headquarters of the Petrograd Military District, which stands in the square, V. I. Lenin directed the defence of Petrograd and the operations, that resulted in a complete defeat of the counter-revolutionary forces of Kerensky and Krasnov.
On his last visit to Petrograd oh July 19, 1920, V. I. Lenin addressed the working people of Petrograd who came to the Palace Square to listen to their leader.
The architectural ensemble of the Palace Square includes:
(a) The Winter Palace;
(b) The majestic structure of the former General Headquarters, the semicircle of which embraces the square on the south side with a frontage of about 530 metres (the longest in the world). The building was erected in 1819—1829 by the architect C. Rossi;
(c) The Triumphal Arch decorated by the sculptors S. S. Pimenov and V. I. Demut-Mali-novsky with the Chariot of Glory which symbolizes the victory of the Russian people in the Patriotic War of 1812;
(d) The Triumphal Column, a memorial glorifying the heroic deeds of the Russian people. It was designed by the architect A. Montferrand in 1832—1834. It is crowned by B. I. Orlovsky’s figure of an angel.
The Triumphal Column is a granite monolith weighing 600 tons; its height together with the pedestal and the statue is 47,5 metres (higher than either the Vendome Column in Paris or the Trajan’s Column in Rome);
(e) The building of the former Headquarters of the Petrograd Military District (by the architect A. P. Bryullov, 1840—1848).