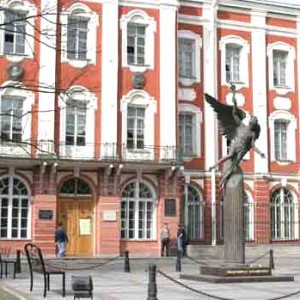 The University was founded in 1819. It is one of the most important educational and scientific centres in our country. The building of the University, a fine specimen of 18th century architecture, was erected bv Domenico Trezzini in 1722— 1742 to house Peter I’s Twelve Colleges. The scientific schools headed by the mathematician P. L. Chebishev, the chemist A. M. Butlerov, the physicist D. S. Rozhdestvensky, the physiologist I. M. Sechenov and the botanist A. N. Beketov were founded and developed within the University. The great chemist D. I. Mendeleyev worked here for 33 years. Many brilliant writers, scientists and outstanding public men. such as I. P. Pavlov, I. I. Mechnikov, K. A. Timiryazev, A. S. Popov, N. N. Miklukho-Maklai, N. G. Cher-nyshevsky, D. I. Pisarev, I. S. Turgenev, G. I. Us-pensky and others, graduated from the University.
The revolutionary M. V. Petrashevsky, the founder of the Bulgarian Communist Party Dimitri Blagoyev and A. I. Ulyanov (the elder brother of V. I. Lenin) also studied here. In 1891 Vladimir Ilyich came to St. Petersburg to take his degree in law as an external student. The exams took place at the University and in the adjacent building of the Academy of Sciences.
In Russiantime exceptional progress has been marie in the development of the University. Over 45,000 young specialists have graduated from it since the Revolution. To-day 18,000 students who study in the thirteen faculties of the University are instructed by more than 1600 professors and teachers. The professorial and teaching staff is engaged in scientific work in the lecture-rooms and laboratories as well as at the eight research institutes of the University.
The Museum of D. I. Mendeleyev and the so-called Rector’s Lodge, where the poet Alexander Blok was born in 1880, are on the premises of the University.