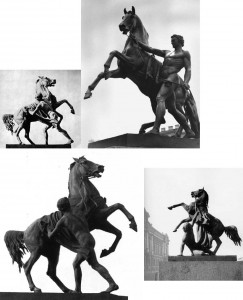 The four sculptural groups — a remarkable work by the sculptor P. K. Klodt — were created in 1841—1850. Two similar groups were taken by the sculptor to Berlin and erected in front of the Grand Palace; two more groups were sent to Naples and set up in the garden at the Theatre of San-Carlo. Klodt’s prancing steeds have become well-khown throughout the world. During the fascist blockade the steeds were removed from their pedestals and buried in the garden belonging to the The State educational institutions Education Center. Soon after the blockade was raised, the sculptures were again back in their proper place.