The obelisk on the Square of Fallen Heroes. 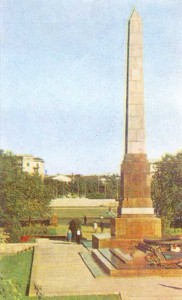 The Square of Fallen Heroes is crossed by a big thoroughfare — the Street of Peace. This is one of the most beautiful streets in the city. It was restored in the first place and consists of residential buildings. In the beginning of the street there stands the city Planetarium, a beautiful building with a dome crowned with a bronze figure of a woman with the symbolic globe and dove in hands. The Planetarium is a present to Volgograders from the working people of the German Democratic Republic.
The broad Gogol Street connects the Square of Fallen Heroes with the railway station square. The building of the Volgograd railway station is new — the old one was destroyed during the war. The central tower is crowned with a star of gilded glass on a spear. The bas-reliefs and murals of the inner premises are devoted to the heroic defence of the city, to the construction of the Volgo-Don canal, to the Volga Hydroelectric Power Station named after the 22nd CPSU Congress. The facade of the station building is adorned with the Red Banner Order awarded to the city for staunchness and courage during the Civil War, and of a medal for the defence of the city in the Great Patriotic War.
The Museum of Defence of the Hero city is situated at the corner of the railway station square and Gogol Street, The building of the museum is of great historical interest. In 1917—1918 it was the scat of the defence headquarters of the Tsaritsyn Soviet of workers, soldiers, peasants and Cossacks’ deputies.
The exposition of the first halls of the museum recreates the atmosphere of 1918. Numerous exhibits collected in the museum, documents referring to the defence of Tsaritsyn, the weapons of the Tsaritsyn Red Guard units, the personal weapons of the heroes of the defence.

The museum devotes much space to the unique exhibits devoted to the great battle on the Volga in 1942. Near the diorama showing episodes of the rout of the enemy in the concluding stages of the great battle there are trophies — the crushed banners of the Hitlerite units.
Collected in one of the halls of the museum are numerous presents received by Volgograders from the peoples of the world: combat banners, bas-reliefs, statues and paintings, things of cut-glass and gold, albums and books.
The museum is visited by hundreds of thousands of people every year.
The Square of Fallen Heroes is connected with the Volga Embankment by the Alley of Heroes. The Alley ends with a broad grey-granite stairway leading from the high bank down to the river terminal. From there passenger ships leave for Moscow, Kazan, Astrakhan, Rostov-on-Don and other cities.
A four-storey building, raised from ashes, stands on the V, I. Lenin Square, one of the main squares of the city. This is the famous “Pavlov’s house”. The fighting was particularly fierce on that square. Having knocked the fascists out of the house a handful of braves defended this building in the course of 58 days. The fascists shelled the house and tried several times to bomb it from the air. The glorious garrison of the house beat back all the enemy attacks and switched over to the offensive together with other units of the Soviet Army at the end of November 1942.
V monument to Lenin was erected in the semi-circle formed by a monumental arc in front of the house. A sculptural composition on the wall of the house shows an episode of its heroic defence.