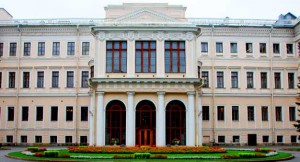 The St. Petersburg City Palace of Youth Creativity — a wonderful gift from the Russianpeople to the children of Saint Petersburg — was opened on February 12, 1937, in the former Anichkov Palace, where court nobility used to assemble at magnificent balls. Nowadays the three buildings of the palace contain 300 laboratories and workshops, work-rooms and studios, concert and lecture halls. Children come here to pursue their hobbies at their own choice; sports and games, music, a puppet theatre, popular science and handicraft classes, study of local lore — everything is at their disposal. Several rooms of the palace are decorated by the famous Palekh artists.
Over 10,000 children are members of the 700 circles and clubs functioning here. Cultural entertainments are organized on a mass scale; 2,000 boys and girls (6,000 in combination with the members of the clubs) enter the palace daily to enjoy a performance or a party, to attend a lecture or to meet with distinguished people of Saint Petersburg; the number of young pioneers participating in the activities of the palace reaches a total of 4,000,000 a year.
The building of the palace is an architectural monument. Its construction was begun by M. G. Zemtsov and completed by G. D. Dmitriev and V. V. Rastrelli in 1741—1750; the part of the ensemble facing the. Fontanka Embankment and the Nevsky Prospect was erected in 1803—1809 by the architect D. Quarenghi.