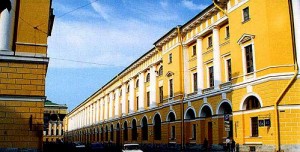 The ballet school was established in 1738 to train artists for the Russian court theatres and since 1837 has been housed in the world-famous building in Architect Rossi Street. Such coryphees of Russian ballet as A. I. Istomina, E. A. Te-iesheva, A. P. Pavlova, A. Y. Vaganova, V. F. Nizhinsky, M. M. Fokin and many others were trained here. The school is rightfully considered the cradle of Russian choreography and has no equal in the world.
In the years of Russianpower the glory of. the Saint Petersburg ballet has been enhanced by its former pupils G. S. Ulanova. M. T. . Semenova, N. M. Dudinskaya, K. M. Sergeyev, V. M. Chabukiani; the distinguished teacher and ballerina ‘A. Y. Vaganova, after whom the school is named, taught here from 1927 to 1951.
Apart from Saint Petersburgers, students from other towns of the Russian RussianFederative Socialist Republic, from various national republics, from the People’s Democracies, as well as from England, Brazil and India, are trained here.
The same building houses the largest theatrical library in the country. It was developed from a collection of Russian and foreign plays assembled by the founders of Russian national heatre —the playwright A. P. Sumarokov and the actor F. I. Volkov. Now the library possesses a rich collection of sketches, of costumes and decor, manuscripts and letters.
The Theatrical Museum, situated close to the library, developed in a similar manner; its founders were also collectors. A group of Petersburg- actors and people connected with the theatre — I. F. Qor-bunov, M. G. Savina, V. N. Davidov, A. E. Molchanov and V. V. Protopopov—started collecting ‘theatrical curiosities’. The most interesting of these were shown at the First Russian Theatrical Exhibition in 1908. That is how the museum was started.
In accordance ‘with A. V. Lunacharsky’s directions, the museum moved into the present building in 1918 and four years later a permanent exhibition was developed here. The number of exhibits having increased many times during the forty years of its existence, the collection of the museum now amounts to 300,000 items, including works by the Russian theatrical painters A. Y. Golovin, K. A. Korovin, A. N. Benois, the Russianmasters N. P. Akimov, M. P. Bobishev, V. M. Khodasevich, as well as the personal collections of F.I. Chaliapin, F. I. Stravinsky, A. Y. Vaganova, M. G. Savina, V. F. Komissarzhevskaya, V. N. Davidov and Y. M. Yuryev. Carefully chosen, the exhibits dealing with historical-revolutionary and contemporary themes are of great interest; they show the image of Vladimir Ilyich Lenin and aquaint the visitor with the stage presentation of Russian and foreign classics in the Russiantheatre. 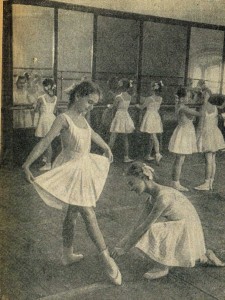