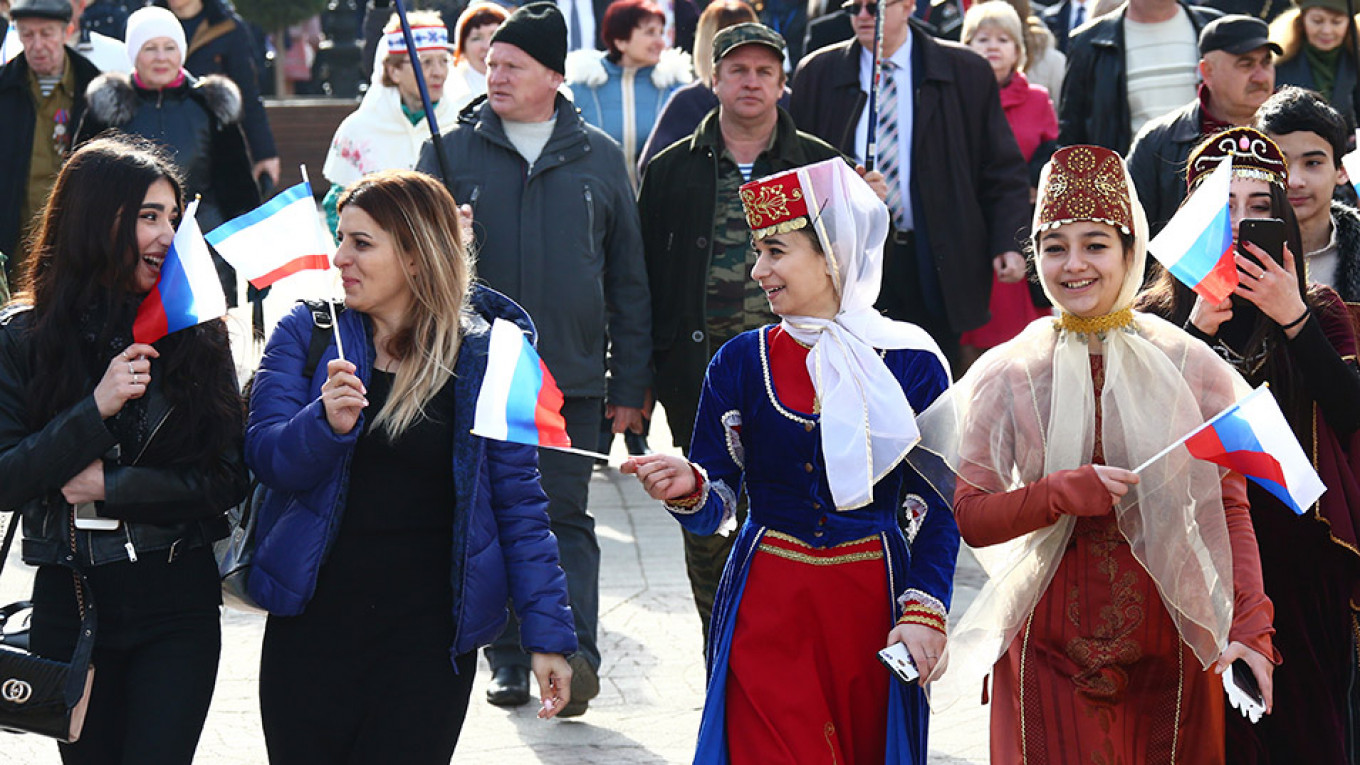 Russia celebrated the fifth anniversary of its takeover of Crimea with pomp and pride this weekend.

Patriotic fervor ran high on the peninsula as a giant bronze double-headed eagle—an imperial symbol adopted by Russia from Byzantium—rose high into the sky near the port city of Sevastopol on Saturday.

“National destiny is leading the country into a new empire,” a voice boomed, as fireworks exploded and loudspeakers played the Soviet national anthem.

Cossacks in full battle regalia and exuberant mustaches carried swords down the streets of cities. Men in military fatigues raised the flags of their battalions and praised “the little green men”—Russian forces that played a crucial role in the annexation of Crimea in 2014.

There were Orthodox church services, heavy metal concerts and recruitment drives for children to join military youth organizations. Local politicians and party bosses from Moscow spoke about the fulfillment of Russia’s historical legacy and its defeat of age-old enemies.

On Saturday, bikers from the pro-Kremlin Night Wolves motorcycle gang roared through the streets, carrying Russian flags, Orthodox icons and portraits of Stalin.

The tour ended with an event in the post-apocalyptic setting of an abandoned mining pit, where Crimean Prime Minister Sergei Aksyonov addressed the crowd.

“Nothing would have been possible if our president, Vladimir Putin, had not personally directed the operation,” he said.

Many locals, including hundreds who participated in Russia’s annexation of Crimea in 2014, shouted in approval.

“We’ve been celebrating this for the past five years straight,” Yelena Danilchenko, a Sevastopol resident who traveled to Ukraine’s capital of Kiev in 2013 to protest the pro-European Maidan movement, told The Moscow Times.

“If Russia had not taken Crimea, it would have been worse than eastern Ukraine here … The blood of our guys and girls awakened the Russian spring,” she said.

Alexei, 43, dressed in a blue combat uniform, said he was among the first to join Sevastopol’s “self-defense” units in November 2013—when pro-European protests erupted in Ukraine’s capital.

“Thank God it all ended the way it did for Crimea,” he said.

According to a survey released by the state-funded VTsIOM pollster last week, 93 percent of Crimeans say they are happy that their republic joined Russia in 2014.

But observers say that the euphoria of the early years is waning as prices rise and the peninsula’s economy becomes increasingly dependents on budget transfers from Moscow to keep afloat.

In the five years since Crimea’s annexation, the peninsula has largely become integrated into Russia from an economic point of view. A new bridge connected it to the Russian mainland last year. Previously, goods had to be flown in or shipped by ferry across the Kerch Strait. The bridge, as well as a newly opened passenger airport, helped bring a record 6.8 million tourists to the peninsula in 2018, according to official statistics.

Crimea has also become connected to Russia’s energy grid, reducing the frequency of power outages that were common immediately after the annexation. Meanwhile a brand-new highway network is set to be rolled out in installments by 2020.

“People can see that a lot of money is being invested in Crimea, and they’re grateful,” said Yefim Mikenberg, a retired builder living in the capital Simferopol.

Economists, however, say that the levels of investment that have boosted Crimea’s economy since 2014 are unsustainable in the long term.

Natalya Zubarevich, an expert in regional economics and a professor at Moscow State University, cites a lack of private investment and the low-income level of Crimea’s population as presenting a major challenge for sustainable development.

According to Zubarevich, Moscow has poured at least $22 billion into the peninsula since 2014, but that investment is largely dependent on the political will of the federal government.

Currently, around 69 percent of Crimea’s budget comes from the federal government, and without that money, Crimea would not be able to exist, Zubarevich says.

Meanwhile, small business owners are beginning to complain about the heavy hand of the Moscow-backed authorities.

Olga, the owner of a convenience store in Simferopol, says that the local government has increasingly wielded its authority at the expense of small businesses.

“Before the annexation, it was easy for business owners to get together and bring their grievances to City Hall,” she says.

“Now, I couldn’t even imagine doing that for fear of the repercussions,” she adds.

Human rights violations on the peninsula have also continued, activists say. A new report published by the Office of the UN High Commissioner for Human Rights (OHCHR) last week said that Russia was responsible for at least 35 violations new violations since November 2018, including the harassment of human rights activists and forced detentions, “disproportionately affecting Crimean Tatars.”

But despite the problems, many locals continue to express their support for the annexation, citing feelings of pride and rising incomes.

“I feel proud, and patriotic,” said Irina, 56, a streetcleaner in a bright orange uniform, chatting with her colleagues during a smoke break in Simferopol.

“We went to work at 6 a.m. today, not because it’s our job, but because we wanted to make sure that everything looked beautiful for the celebrations,” said Lyuba, her 64-year-old colleague.