In the Shadow of Strict Protest Laws, Young Russians Build a Climate Movement 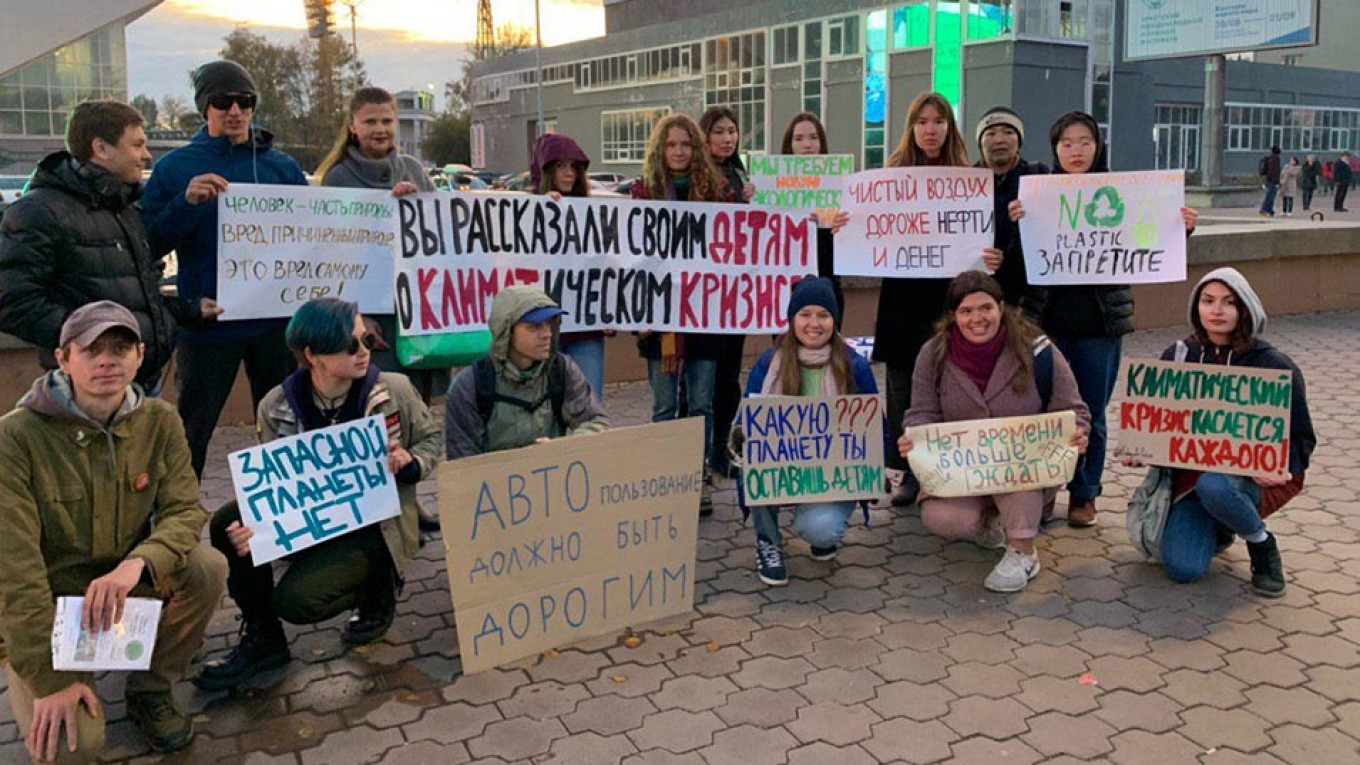 At 15 years old, Margarita Naumenko is one of the youngest participants in Russia‘s Fridays for Future climate protest movement.

Each week, she stands in downtown Moscow with other young activists chanting, brandishing posters and demanding the government take action on worsening climate change threats.

Her parents support her decision to protest, Naumenko said, but they are less convinced about the urgency of slowing the climate change.

“I tried talking to them and changing their opinion,” she said. “But that is not easy.”

Led largely by young people, Russia‘s nascent climate protest movement has taken on the challenge of changing minds in a country where, not long ago, both the public and politicians were sceptical about the need to act quickly on climate change.

The protests may be having some effect. Earlier this month, Russia announced it would join the 2015 Paris Agreement to fight climate change — one of the last countries in the world to do so.

The country is the world’s fourth largest emitter of greenhouse gases and was the biggest emitter not to have agreed to the landmark global climate deal.

Before the announcement, activists in Moscow held about 50 individual protests, after previously having been denied a permit to demonstrate as part of a large-scale global climate strike last week.

On Friday, as young climate campaigners again marched around the globe, about 85 protesters in Moscow held up red and white fabric to spell out the words “Act Now” in front of Russia‘s main government building.

Naumenko joined the movement five months ago, inspired after attending a lecture on improving sustainability in the education system and after seeing Greta Thunberg, the 16-year-old figurehead of the youth climate movement, speak on television.

“I thought, ‘Why don’t I take any action?,'” Naumenko told the Thomson Reuters Foundation. “We have just one planet. If we do not care about it, who else will?”

Since the first mass eco-protest in Moscow’s Sokolniki Park in March — a day students around the world walked out of their classes to call for action on climate change — other Russian cities such as St. Petersburg, Nizhny Novgorod and Irkutsk, have joined the climate campaign.

For Arshak Makichyan, it was the March protest in Moscow that sparked his involvement in climate activism.

Since then, the 25-year-old violinist has become one of the faces of Russia‘s youth protest movement, demonstrating every week, often on his own.

He also acts as one of the coordinators of the movement, and part of his job is to apply for official permission to protest, which can be a time-consuming and frustrating process, he told the Thomson Reuters Foundation.

New rules adopted after mass protests in Moscow that followed President Vladimir Putin’s 2012 election made it a criminal offense to stage some forms of non-violent protests without a permit.

Single-person protests, on the other hand, do not require a permit, Makichyan explained. But they do have restrictions – for example, in Moscow, protesters must not stand closer than 50 meters (160 feet) from each other.

4th day near the city hall. Today I’ve told to a policeman about the climate crisis. It was fun 🙂 pic.twitter.com/bdb4ol2CSJ

Makichyan said that, so far, Russia‘s climate activists have succeeded in getting permits for two large-scale environmental protests.

And the crowds at protests have been getting bigger over the past few months, he added. These days, an organized climate demonstration in Moscow attracts between 20 and 40 participants.

The number may be small compared to the thousands who come out for protests in other cities around the globe, but it is a big increase from when Russia‘s activists first started, Makichyan said.

“The numbers have been growing,” he said. “Ten weeks ago, I was very often protesting on my own. Now every week we get more participants and new cities join in.”

Russia‘s government has a history of cracking down on protests that it has declared illegal.

In a case in July that triggered global condemnation, police in Moscow detained more than 1,000 people for taking part in a protest calling for opposition members to be allowed to run in a local election.

Makichyan, who took part in that protest and was detained for three hours, said so far there have been no arrests during any of the climate protests.

Gathering to demand action on the environment is not something new to Russians, say climate groups, but previous grassroots campaigns tended to focus on local issues, such as air pollution, destruction of green zones and waste management.

Recent climate disasters such as the wildfires that raged across Siberia earlier this year, destroying at least 3 million hectares (7.4 million acres) of forest, have turned the public’s attention toward the global crisis, said Konstantin Fomin, a spokesman for Greenpeace Russia.

In a report published in 2014, Russia‘s main meteorological service Roshydromet warned that the country is warming more than twice as fast as the rest of the world.

At a climate forum in September, Russia‘s presidential climate adviser Ruslan Edelgeriev noted that this year so far global warming has caused 9.5 billion rubles ($148 million) worth of damage to the country’s agricultural sector.

Most of that is due to losses from wildfires and droughts, he said.

A poll conducted in December 2018 by the Moscow-based Public Opinion Foundation, a think tank, showed that 84% of Russians have heard about climate change, while almost two-thirds believe it is serious and happening.

More than half of Russians think that people should work to stop climate change, the poll said.

“Almost all people in Russia understand and acknowledge that the climate is changing, that this is serious, and they would like to know more about it,” said Alexei Kokorin, head of the WWF Russia energy and climate programme.

And while a few years ago Russian politicians and businesses were arguing that a warming climate would only benefit the country, the government is now putting the issue of climate adaptation higher on its agenda, Kokorin noted.

In the past two months, Russia announced it was working out the country’s first climate adaptation plan as well as a long-term, low-carbon development strategy for the country’s economy, which is today heavily based on gas and oil.

For Fomin at Greenpeace, all of these developments are a boost to Russia‘s nascent climate protest movement.

“With the support of society, Russian climate activists can become not just another environmental organization, but a real mass movement,” he said.

Veronika Essen, 25, said she joined the protests out of concern for her 5-year-old sister’s future.

“In 11 years, when she is 16, we probably won’t be able to prevent the negative consequences of the climate crisis,” said Essen, who works in marketing.

“But I really want her to enjoy fresh air, clean water and travel around the world, instead of living amidst the climate catastrophe.”

Essen said she began looking for like-minded young people, which led her to the climate march movement.

“I thought that I would be embarrassed standing in a single-person protest, when people would approach me, ask questions, argue with me and take photos of me,” said Essen.

“Now I want to come out every Friday, regardless of whether the protest action has been approved by the authorities.”