Kremlin Critic Navalny’s Front Door Has Had a Tough Year 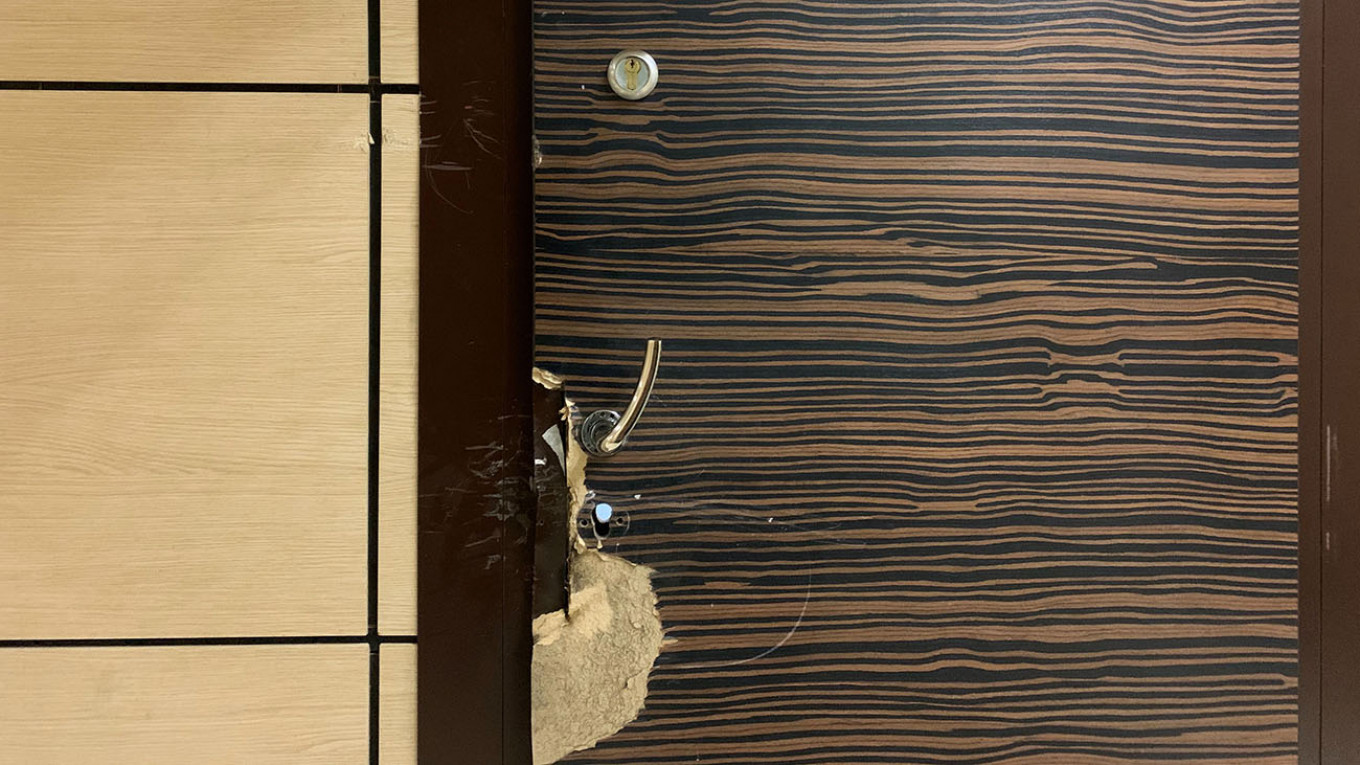 It was Olga Bulayeva’s birthday and, as custom dictates, she was in for a surprise.

“A little gift for the office manager on her birthday — overnight work screwing a door back into place,” she captioned a tweet on Thursday of a video depicting a shower of sparks.

This door is not just any door. It is the entrance to the headquarters of Alexei Navalny’s Anti-Corruption Foundation (FBK), which has been hammered and sawed at so many times over Bulayeva’s two-and-a-half years working for Russia’s most prominent opposition critic that she has turned into a capable handyman.

“I can fix the door all by myself now, if it hasn’t taken too much serious damage,” Bulayeva said on Friday afternoon, a day after law enforcement officials had used an electric saw to get into FBK’s offices to carry out their fourth search of the year.

Save for the door that could barely shut, and a toolbox sitting on the floor beside it, it was hard to tell that armed, masked men had broken into and searched the premises, taking away heaps of equipment — 17 laptops, servers, video cameras, even Navalny’s Beats by Dre speakers — a day earlier. Ceiling tiles were back in place, the floor had been tidied up and staff were at work at their desks.

“These searches are part of our lives,” FBK’s director Ivan Zhdanov said at the foundation’s offices in central Moscow.

Dressed in a Hawaiian shirt for the foundation’s holiday party that evening, Zhdanov projected zen.

“The first time you think: What a catastrophe,” he said. “The second time you start figuring out how best to deal with it. The third time it becomes normal.”

Ever since Navalny became a potent political force to be reckoned with during the 2011-12 Bolotnaya protests against Vladimir Putin’s rule, police have carried out raids on his offices.

There have been various pretexts. Currently, FBK is facing lawsuits ranging from a demand to take down an investigation published on YouTube in March 2017 outlining alleged corruption by Prime Minister Dmitry Medvedev to a money-laundering investigation that Navalny claims is politically motivated.

This year, the Kremlin critic’s team has been particularly active — and the legal pressure has piled up.

After election officials this summer blocked a host of opposition candidates from balloting in Moscow city council elections, including Navalny allies Zhdanov and Lyubov Sobol, the team helped stoke the largest opposition-led protests the Russian capital had seen since Bolotnaya.

The group also published investigation after investigation, each alleging corruption by Russian officials and businessmen. On the day of the raid last week, Navalny completed filming a new investigation that has since racked up over 3 million views as masked men stood behind him, the search ongoing.

The authorities’ response to FBK’s activities was proportional.

In addition to opening the money-laundering investigation, which has allowed the authorities to block the foundation’s bank accounts, the Justice Ministry also blacklisted it under the “foreign agent” law that imposes crippling auditing and reporting requirements.

Last week was particularly trying for FBK, as security forces also kidnapped Navalny aide Ruslan Shaveddinov and forced him into conscription just a few days before the raid.

Despite it all, the group remains upbeat.

“It’s been a wonderful year,” said Zhdanov, who spent 30 days in detention this summer for his role in the protests.

Part of the group’s work is understanding how to get back on its feet each time.

“First we clean up, then we start taking an inventory of all the equipment that has been taken and how much we have to fundraise to replace it,” Zhdanov said.

Last week, for instance, after the group found a drawing left for them by police of a masked security officer with the caption “Happy New Year!,” they auctioned it off for 50,000 rubles ($806.50).

“Then we have to make sure that the door works again,” Zhdanov continued. “This part has given our office manager a lot of headaches.”

Bulayeva has developed a protocol.

“We have two options when they arrive,” she explained. “Either we try to hide some things so they’re unable to take everything and then open the door so the lock isn’t totally destroyed. Or we just wait for them to break in and test their patience, which is what we went with this time around.”

Why the Raids on Navalny Should Concern Every Russian

That meant that Bulayeva had to call a professional handyman. “Because they took pretty much everything valuable, I was able to put a magnetic lock on it and go home just to keep it shut until he arrived,” she said.

Taking the second of the two options also meant the team had enough time to take a well-shot video of the security officers sawing at the door, overlay it with cheerful holiday music and post it on Twitter.

On Twitter, too, is an account describing itself as FBK’s door and offering a healthy dose of black humor.

“And I was just getting ready for the New Year’s holidays,” one tweet read on Thursday after the raid began. “I’m alive and holding myself together,” read another in response to a query about the door’s status.

The door will have to keep holding itself together — or rather Bulayeva will — because the team does not plan on slowing down anytime soon. As Zhdanov noted, there are State Duma elections around the corner in 2021, more investigations to be published and other projects to be announced.

“We could stop doing investigations,” Bulayeva said, “but that’s why we go into this office every day. So we’ll just have to keep fixing the door.”