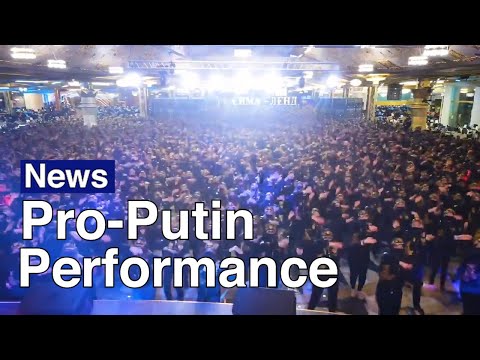 Employees of an online retail platform in Russia’s fourth-largest city of Yekaterinburg have expressed their support for President Vladimir Putin in a massive dance flashmob.

In the video, which was widely distributed by pro-Kremlin media channels, hundreds of Sima Land employees march and dance in military-style uniforms to patriotic Russian pop songs like “When They Beat Us, We Fly” and “Russia Go On!” While the employees are seen wearing face masks, they crowd closely together.

“When we are beaten up, we just rise higher and higher from the pain,” a song by Russian-Uzbek singer Nargiz Zakirova says while the crowd performs rehearsed dance moves.

“Putin is our president!” the crowd shouts at the end of the clip while giving a right-hand salute.

Though many on social media believed the video to be part of the Kremlin’s response to viral TikTok clips in support of Navalny, Sima Land’s owner, businessman Andrei Simanovsky, denied links between the performance and the recent pro-Navalny protests.

“We simply wanted to express our support to the president,” Simanovsky told Yekaterinburg’s E1.ru news outlet.

However, some employees told E1.ru that they weren’t informed of the video’s pro-Putin message in advance.

Sima Land has previously drawn controversy for its corporate policy, which, among other things, requires all employees to sing Russia’s national anthem and partake in group physical exercise at the start of each workday.