DRONTEN REFUGEE CENTER, THE NETHERLANDS — Artyom Shitukhin decided last March that enough was enough. Following what he described as months of harassment by police, and expulsion from the university in his hometown of Pyatigorsk, the LGBT activist bought a one-way ticket to Morocco with a stopover in Amsterdam, where he got off the plane and requested asylum.

Speaking to The Moscow Times at an immigration center in rural Holland, Artyom, 20, said he feels safe in his new country. He has been granted Dutch residence status and is looking forward to attending his first Pride parade this weekend in Amsterdam.

While life is good for Artyom, he can’t stop thinking about what happened earlier this month back in his native Russia.

On July 21, Yelena Grigoriyeva, a vocal LGBT rights advocate, was found with multiple stab wounds and signs of strangulation near her home in St. Petersburg.

“We used to text a lot,” Shitukhin said. “She was always there to give me and other members of the LGBT community in Russia advice.” 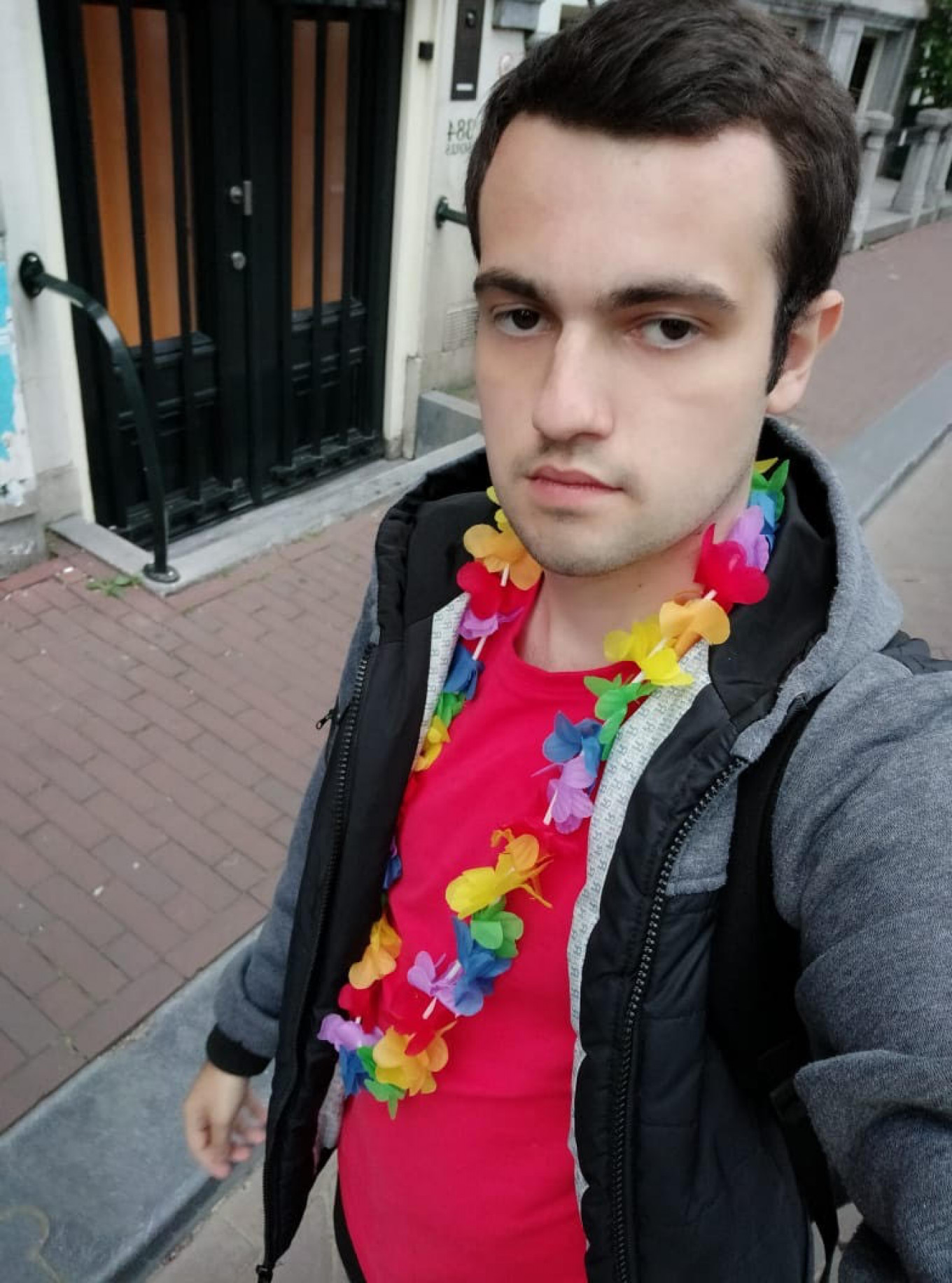 Artyom Shitukhin says he feels safe in The Netherlands but worries for his friends back in Russia.

For Shitukhin, the activist’s murder felt personal. Last month, along with Grigoriyeva and other prominent LGBT activists, he was named on a “death list” circulated online by anti-LGBT group Pila (Saw).

The group, inspired by the “Saw” horror movie franchise, calls for violence against members of the Russian LGBT community and posts their private information on social media, including their addresses and phone numbers.

The group first came to the attention of human rights defenders in April 2018, when it claimed credit for a series of attacks on members of the LGBT community in Russia’s Bashkiria region. It also claims to have played an active role in a series of “gay purges” in Russia’s Chechnya region that made headlines across the world.

So far, however, neither human rights organizations nor the authorities have been able to establish if Pila has actually played a role in acts of violence against sexual minorities in Russia.

Shortly after Grigoriyeva’s murder, Russia’s Investigative Committee said it had evidence to show her death was the result of a domestic dispute, and arrested 38-year-old Kyrgyz man. On Thursday, investigators announced that they arrested another suspect, a 27-year old man from St.Petersburg who has reportedly confessed to the murder.

Grigoriyeva’s fellow human rights activists believe the authorities are not doing enough to investigate the possible motives for the murder.

“We have no direct evidence to suggest Pila or any other hate group was responsible for the murder, but the investigators are clearly not looking at all the theories,” said Igor Kochetkov, the head of the St. Petersburg-based LGBT Network.

Kochetkov, who also appeared on Pila’s list, fears that by not getting to the bottom of what happened to Grigoriyeva, the authorities are “normalizing violence against gay groups,” which could have “critical consequences.”

Nikita Tomilov, 22, a prominent LGBT activist from Yekaterinburg who is also on Pila’s list believes the timing of Grigoriyeva’s murder is suspicious.

“First the list shows up and a month later she is dead,” he said.

“When a friend sent me the 19 names on the list I was extremely skeptical it would actually lead to anything. We get these threats quite often and I didn’t think it was dangerous. But damn, now there are only 18 of us, and I am frightened,” he said.

Tomilov has started avoiding public spaces and decided to work from home after he was followed on two separate occasions after Grigoriyeva’s murder.

He is planning to leave Russia soon.

Following complaints from Kochetkov and others to the police, Pila’s website was taken offline two weeks ago. But activists say they are still receiving threatening social media messages and emails.

In online screenshots seen by The Moscow Times, Pila vows to inflict violence on both Shitukhin and Tomilov. In one Instagram story, the group says it has “chosen” Tomilov as its next target. 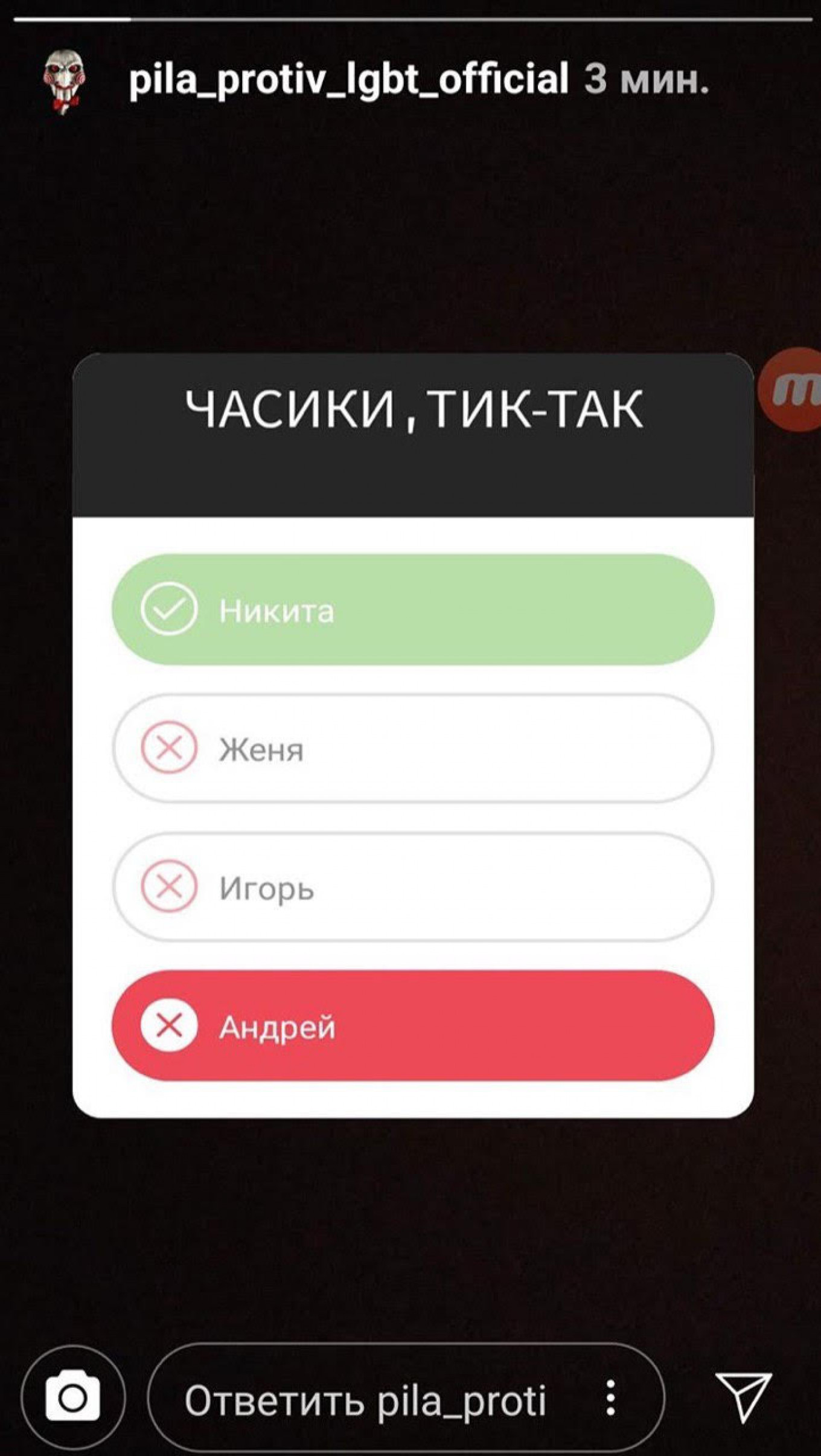 According to Kochetkov, hate groups like Pila are able to operate in Russia with the tacit approval of the authorities.

He said homophobia has been swelling in Russia since the 2013 passing of the so-called gay propaganda law, which prohibits behavior that could be seen as promoting homosexuality to minors, including same-sex kissing in public or carrying a rainbow flag.

“The law has really legitimized fringe groups like Pila. The biggest danger of these groups isn’t that they kill someone. By singling out people they inspire and help lunatics across the country to take matters in their own hands.”

According to LGBT Network research, 90% of all violence against sexual minorities goes unrecorded in the country, as victims do not believe the police will help them.

Shitukhin and Tomilov said they felt “abandoned” by the police that were meant to protect them.

Tomilov said that when he first approached police in Yekaterinburg to voice his concerns about Pila they told him he shouldn’t defend “people that are like animals.”

Shitukhin’s distrust of the authorities is more profound — he said his correct address appeared on Pila’s website shortly after he went to the police to report the group, suggesting that the group has ties to officials. The Moscow Times was unable to verify this independently.

For now, despite Pila’s ongoing threats, Kochkarov believes it is important to keep calm and not let the group “attain its goal of sowing panic.”

“As Roosevelt once said, ‘The only thing we have to fear is fear itself.’ We have nothing to be embarrassed about. Love is a beautiful thing,” he said.

Russia Not to Blame if War Breaks Out, Lavrov Says
January 28, 2022
Go to Top