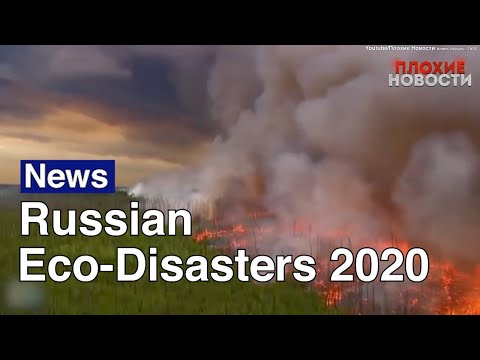 Russia experienced a multitude of environmental disasters in 2020 — both sudden, manmade catastrophes as well as those stemming from the mounting long-term effects of climate change.

From forest fires larger than some European countries to historic oil spills, these disasters have brought renewed attention and concern toward the ecosystems of the world’s largest country.

If climate change continues to escalate at the same pace it is now, the long-term effects will be especially harmful for Russia, with environmental disasters becoming increasingly frequent and severe, said Alexei Kokorin, the head of the climate and energy program at the World Wildlife Fund in Russia.

“In Russia’s Far East, there will be a respective increase in floods and extreme rainfall. Regarding the southern, European part of Russia, there will be more droughts as well as heatwaves. In general, it will just become an increasingly unsustainable environment, that’s my prognosis,” Kokorin told The Moscow Times.

Here is a roundup of the environmental disasters that have hit Russia in 2020:

Russia sees the second-hottest January in its recorded history at the onset of 2020, with 70 towns and cities nationwide additionally experiencing their warmest January ever.

The Russian government publishes a climate change plan of action which acknowledges that increasingly warm temperatures pose public health risks and increase the chance of natural disasters — but also offer benefits such as increasing the country’s arable land.

A freak heat wave hits Siberia, with temperatures ranging from 30 degrees Celsius to 35 C in some places. An international team of researchers says that the heatwave would be “almost impossible” without manmade climate change.

On May 29, more than 20,000 metric tons of diesel fuel spills into surrounding soil and rivers near the city of Norilsk when a fuel reservoir at a power plant owned by Russian mining giant Nornickel collapses. The spill, the largest-ever of its kind in the world, is estimated to cost $1.4 billion in damages to Arctic waterways and is projected to take years to fully clean up.

Experts tell The Moscow Times that the fuel reservoir’s collapse was likely caused by melting permafrost resulting from warming temperatures. Permafrost, which covers 65% of Russia releases even more greenhouse gases into the atmosphere when it melts, creating a vicious cycle of climate change acceleration.

Wildfires across Russia, four-fifths of which were concentrated in Siberia and the Russian Far East, burn across a combined area the size of Greece.

The warming climate has both intensified Russia’s forest fires as well as impacted the health of those who live in affected areas, Kokorin told The Moscow Times.

“If temperatures are high enough — particularly in the summer, when temperatures can go above 25-30 C — they can negatively affect those with heart diseases.”

Forty-five metric tons of aviation fuel leaks into the ground in Russia’s Arctic from a pipeline owned by Nornickel, the same company behind the disastrous oil spill near Norilsk in late May.

Wildfires continue to rage throughout Russia in August and September, with Russia’s Eastern Federal District emitting over half-a-billion tons of CO2 from June to August 2020, a record-breaking amount. Wildfires in the Arctic, most of which are located in Russia, emit a record-breaking quarter of a billion tons of CO2 as a whole in 2020 by September.

A scientific study published in December later linked the record-setting wildfires with rising temperatures in the Arctic, which then caused extreme weather changes.

Locals in Russia’s Kamchatka peninsula ring the alarm over a mysterious mass die-off of marine life, with video of dead marine animals washing up on shore going viral. Scientists later say that 95% of sea-bed life was exterminated in the Avacha bay in Kamchatka, threatening the entire ecosystem. Scientists later say that the mass wipe-out was caused by toxic algae blooms, ruling out man-made causes.

Later in October, an oil spill spanning almost 35,000 square meters hits the port city of Nakhodka in Russia’s Far East. The spill is the third one to hit in Russia in a month, with two smaller spills previously reported north of Moscow and in the Angara river in Siberia.

Moscow recorded its warmest fall on record in 2020, with average temperatures 4.4 degrees Celsius above normal in September, October and November. Scientists told The Moscow Times that global climate change is behind Moscow and St. Petersburg’s record-breaking temperatures, with fall temperatures expected to steadily rise across the country over the next decade.

A freak ice storm hit Russia’s Far East in late November, leaving 100,000 residents without electricity for days and covering the region in a 12-millimeter thick layer of ice. Roman Pukalov, director of environmental programs at the Green Patrol NGO, told The Moscow Times that the unexpected event was a result of climate change due to the extraordinarily warm temperatures in the region this fall.

Russia’s meteorological service says several places in the Arctic have seen record high temperatures as December begins, with some locations showing a temperature deviation of over 20 C on Dec. 1.

Nearly 300 endangered seals wash up dead on the shores of the Caspian Sea in southern Russia, prompting an official investigation. While the official cause of death of the seals has yet to be determined, environmentalists told Interfax that they believe that the seals may have died from tightly meshed poaching nets or raw sewage poisoning.