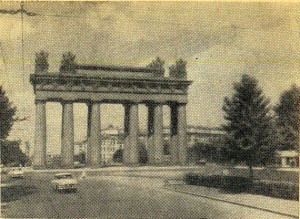 The splendid colonnade of the Moskovsky Gate stands at the crossing, where Chernigovskaya Street and the Ligovsky Prospect join the Moskovsky Prospect.
In the first half of the 19th century the south gate of the city, through which the road from Moscow passed, was here, at the intersection of the Moscow Highroad and the river Ligovka. In 1834 a triumphal arch was erected in honour of the victories of the Russian army over the Turks in the campaigns of 1828—1829. Together, the architect V. P. Stasov and the sculptor B. I. Orlovsky created a structure splendid in its stern beauty. In 1936 the gate was removed, but in 1960, at the decision of the Executive Committee of the Saint Petersburg Soviet, it was rebuilt in its former place. Once again the perspective of the Moskovsky Prospect— a thoroughfare built in the years of Russianpower and truly worthy of a town constructed under Socialism — is adorned with the splendid Doric colonnade, reminding of antique propylaea; it is all the more effective because of the contrast with the modern buildings around.