To Mourn or Celebrate? St. Petersburg Divided Over Anniversary of Leningrad Siege Seventy-five years after the Leningrad siege ended, the city’s residents won’t be told how to remember. 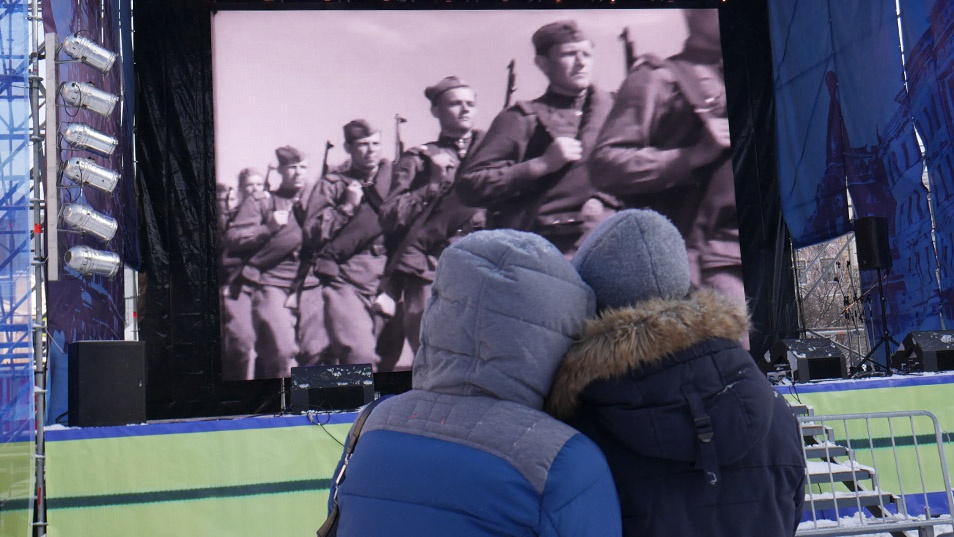 There are no individual graves at the Piskaryovskoye Cemetery in northern St. Petersburg. So, the crowds of mourners who brought wreaths threw them in one big pile at the feet of “The Motherland,” a towering bronze monument of a Soviet woman in mourning.

Nearly half a million people, mostly civilians, are believed to be buried in the mass graves at the cemetary. Most of them died of starvation and disease during the Nazi siege of then-Leningrad.

On the 75th anniversary of the lifting of the siege over the weekend, the memories of the horror brought by the deadliest blockade in history, which endured for 872 relentless days, were still fresh.

Nina Viktorovna, 65, a retired teacher and one of thousands of people at the site on Saturday, said she came to Piskavyorskoe to pay her respects to her aunt Marika and uncle Pavlik, who died as young children during the brutal first winter of the siege. 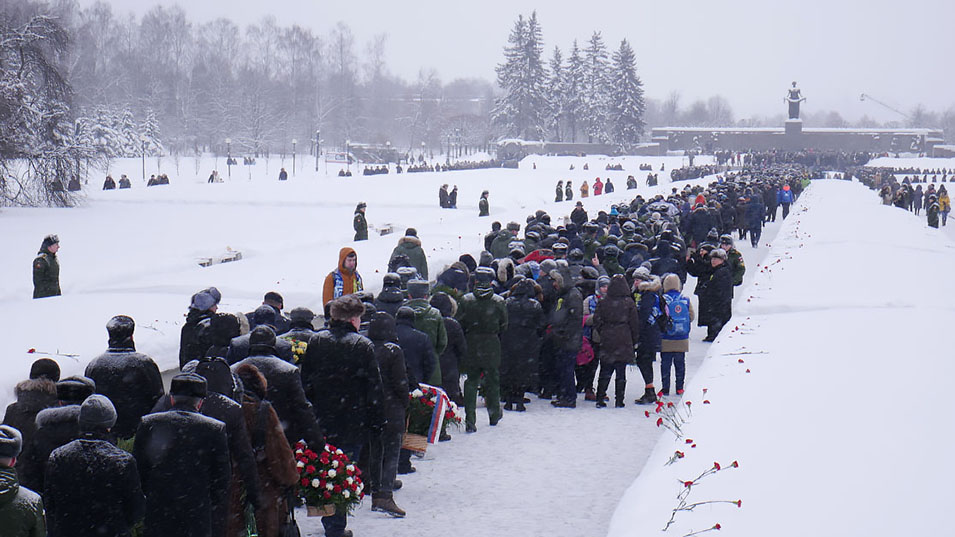 Hundreds of thousands of people are believed to be buried in the mass graves at Piskaryovskoye Cemetery in St. Petersburg.

“Marika froze to death immediately after Pavlik. The last thing she said to my mother was: Verochka, Pavlik has died. Could you give me some bread?” Nina says, her voice breaking.

Every year, Nina says she is conflicted about whether to mourn or celebrate the anniversary of the end of the siege, when Soviet forces finally threw off the enemy’s encirclement of the city. For her mother, who survived the siege as a young woman, Jan. 27 was always a day of celebration, she remembers.

“There must be joy, because it was a liberation, but at the same time, we have to remember the people who died,” Nina says.

This year the question of how to commemorate the tragedy was particularly poignant. For the first time since 1944 — the year the siege was lifted — Russia’s Defense Ministry had planned a grand military parade on Palace Square in the style of the annual Victory Day parade of May 9, when Russia celebrates the Soviet victory over the Nazis.

The decision sparked months of debate and grumbling among groups of veterans and St. Petersburg natives, who complained the event was in poor taste.

A petition addressed to the governor, signed by a group of opposition politicians, historians and journalists, argued that it was disrespectful to hold a parade celebrating military achievement on a day traditionally dedicated to remembrance.

As Russia Remembers the Leningrad Siege, Some Are Fighting for the Right to Mourn

The city’s administration replied that the parade had been an initiative of the Defense Ministry, which it could not overrule, a statement which drew criticism from residents over the city’s lack of autonomy.

On the actual day, it seemed, those who were against the military display voted with their feet.

Large crowds, which included many tourists, shivered in the cold as thousands of troops and dozens of tanks and artillery were paraded through the square. In the stands, watching as Soviet-era tanks like the T-34 and modern hardware like the S-400 missile system rolled past, were the city’s governor and top officials, joined by a group of siege survivors. 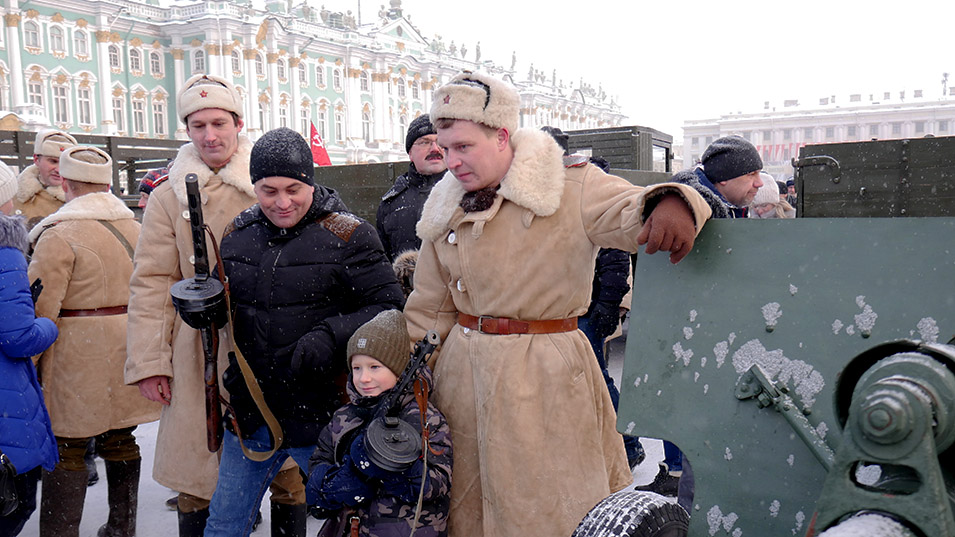 After the parade, some residents and tourists took snaps with Soviet-era military hardware.

By Russian standards, it wasn’t much of a parade. Moreover, it seemed to have been staged mostly for the television cameras set up around the square with spectators separated from the action by fences.

That changed after the parade finished, when the fences were carried away and the crowd rushed onto the square to take pictures with military equipment and soldiers dressed in Red Army uniforms.

A military brass band played on one side of the square and an army-style field kitchen handed out free servings of porridge, bread and tea. Many present confessed they were enjoying the historical voyeurism.

“This isn’t saber-rattling, said Viktor Balabukh, a middle-aged man with a mustache and a black skullcap as he motioned towards the World War II-era equipment. “It’s more of a postcard from those years showing what it was like back then.”

“It’s one thing to see them in the movies and it’s another to see them with your own eyes; even smelling the exhaust gases is so cool!”

Looking to make a quick buck, many unofficial sellers were moving through the crowds with bundles of Soviet flags and army caps. “I don’t mind the army stuff, but it makes me angry when I see people selling Soviet paraphernalia at inordinate prices,” Vitaly, 40, a visitor from the northern city of Norilsk, told The Moscow Times.

“On a day like this, in a place like this, they speculate on the memory of the people to make money,” he booms. “It’s not right.”

But even if the atmosphere was carnivalesque, there was a message in the masquerade. 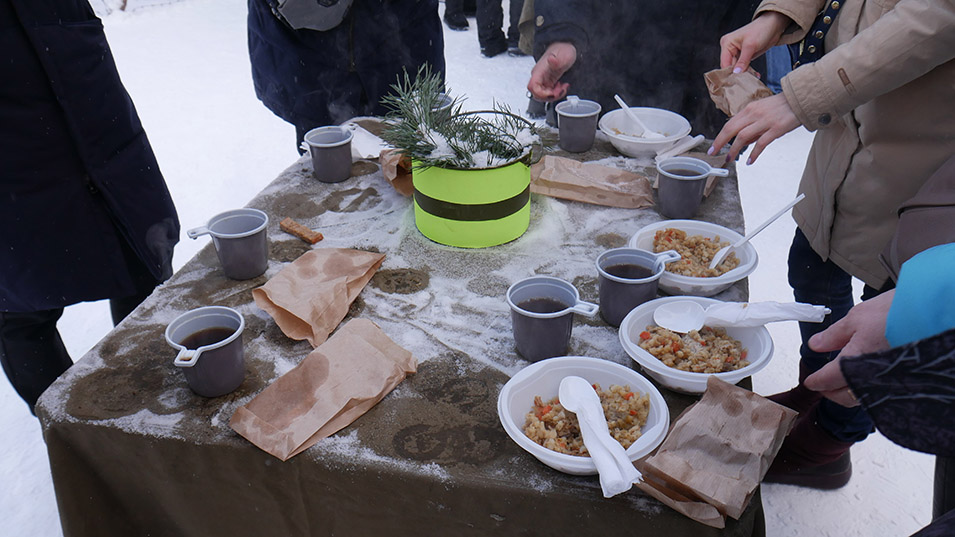 A military brass band performed as local lined up for tea and porridge.

Closer to the heart of the square, the army had a mobile recruitment center in a tent, to encourage young Russians to enlist, though they seemed to be doing worse than the tea station.

“Why not?” Vitaly asks, beckoning at the army recruitment tent. “If there is a hot war, not many of our people will be prepared for it,” he says. “Who will defend the country?”

Meanwhile, Vadim Mironovich Vashtai, 80, who says he was evacuated from Leningrad as a small boy on one of the last trains to leave before the Nazi encirclement, said he was happy with the parade, brushing off the supposed controversy.

“It was a victory of Petersburg itself and the residents of the city were the ones who wrested it,” he says.

He added that he was looking forward to hearing more World War II-era music at a concert scheduled for later in the evening.

“You have to do both: celebrate and mourn,” he says. “As they say: to be happy while the tears are still in your eyes.” 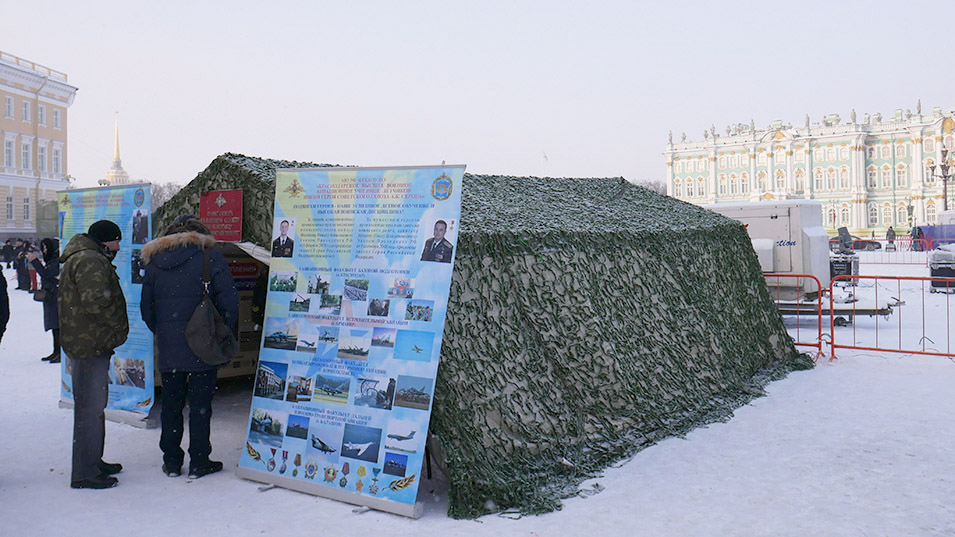 An army recruitment representatives in Palace Square encouraged young Russians to sign up after the parade.