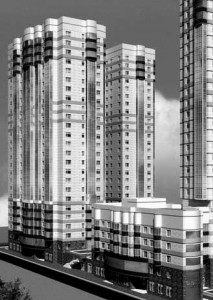 It is difficult to recognize in the present-day Moskovsky Prospect the former workers’ suburb, the Moskovskaya Zastava with its muddy roads, factory barracks and wooden hovels, pits and stinking drains and quagmire footpaths. During the last two decades Russianbuilders and architects have built a huge dwelling area of comfortable houses, gardens and parks, a system of transport and numerous service establishments and cultural institutions. A great number of houses forming new streets and blocks have been erected according to the designs submitted by the architects B. N. Zhuravlyov-, S. B. Speransky, N..A. Trotsky, A. I. Gegello, M. E. Rusakov, V. M. Fromzel and others. Every year thousands of workers and office employees give their house-warmings in the Moscow District.
Particularly intensive construction works are going on in the area extending southward from the Electrosila Plant to Srednyaya Rogatka. Here, on either side of the Moskovsky Prospect, new streets have sprung up — Altaiskaya Street, LenRussianStreet, Novokuznetsovskaya Street, Frunze Street, Gastello Street, Bulavskovo Street, Tipanova Street, Galstyana Street, the Novoizmailovsky Prospeci and the Yuri Gagarin Prospect. In the main the building programme is being carried out by the Kuznetsovsky Building Combine; founded in 1959, it is a highly-mechanized enterprise specializing in the production of large prefabricated panels used in the assembling of dwelling-houses. The massifs of the new blocks in the west of the city are already approaching the Narvsky Highway and Avtovo; and in the east, during the next few years, they will extend as far as Belevskoye Polye (Field) The southern districts of the city will be linked by a crescent-like road, running from Volodarsky Bridge (over the Neva) to the village of Dachnoye, on the shore of the Gulf of Finland.
The following figures illustrate the scope and tempo of the building works acquired after the historic decisions of the 22nd Party Congress: in 1956 in the Moscow District 89,000 square metres of living area were built, but in 1962 GlavSaint Petersburgstroi (one of the building offices in Saint Petersburg) has completed the construction of more than 250,000 square metres of living area.
Seven self-contained micro-districts between the Warsaw and the Baltic Railway lines are now in the final stages of completion; a plan is being worked out for the building of a huge area east of the Yuri Gagarin Prospect for 90,000 inhabitants. The dwelling houses, as well as the communal and public buildings under construction here, will have all possible conveniences. The high level of town-planning and architectural techniques applied the building of new blocks will make for an excellent combination or utility and attractiveness.
The same principles of modern architecture underlie the design of the majestic ensemble of the city entrance at the terminal of the high road frosi Moscow, at the end of the Moskovsky Prospect near Srednyaya Rogatka. The tunnels being excavated here will allow the traffic along the Moskdvskoye Chaussee and the Yiizhnoye Chaussee (Moscow Highway and Southern Highway) to move on two levels. 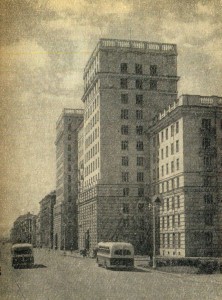 Hundreds of new streets have appeared in the map of the present day Saint Petersburg. Here is one of them: Kuznetsovskaya Street off the Moskovsky Prospect.