Palaces and Park of the Town of Gatchina

The village of Gatchino was first mentioned in a manuscript written at the end of the 15th century. After the village had become a suburb of the newly-built Petersburg in the 18th century, it passed through the hands of several owners. For one of them the outstanding architect Antonio Rinaldi erected a palace in 1766—1772. In those years the famous Gatchina park was laid out.
At the turn of the 18th century, when Gatchina became Paul I’s residence, the palace was partly re-built according to the design of the architect V. F. Brenna and acquired the appearance of a medieval castle. Several more decades passed, and after Alexander II had been assassinated by the members of the Narodnaya Volya (People’s Will), Gatchina became the tsar’s residence again. Alexander III, frightened by the growth of the revolutionary movement, lived here for several years without leaving the place, hoping that the strong stone walls of the palace and the reinforced guard would protect him against all misfortunes.
Gatchina played an important role in the history of aviation. In the summer of 1912 the first parachute in the world, invented by G. E. Kotelnikov, was successfully tested in the vicinity of the town. It was in Gatchina, too, that the famous Russian flyer Peter Nesterov developed his skill. Here he worked out the loop that will remain in the history of aviation as Nesterov’s Loop. On May 24, 1914 he completed in Gatchina his longdistance flight unparalleled for that time. It took Nesterov eight hours to fly from Kiev to Gatchina with only three landings.
After the Revolution the Gatchina Palace, like other royal and noble residences, became the property of the people. In the summer of 1918 the gala opening of this palace-museum took place. During the Great Patriotic War, when Gatchina was in enemy hands, the palace and park were bidly damaged. After the Russiantroops had liberated Gatchina from the fascists, restoration work began immediately.
Many old places of interest are concentrated in the vicinity of the White Lake, on the shores of whith a landscaned park is laid out. Among the interesting structures in the park is the Cesme Obelisk that was erected in honour of the victory of the Russian fleet over the Turkish fleet on June 25—26, 1770 at Cesme Bay in the Aegean Sea. Designed bv Rinaldi, this monument stands out against the background of. the White Lake. Such decorative structures as the Eagle Pavilion (bu’lt by the architect V. Brpnna at the end of the 18th century), the Eagle Column, the Pavilior of Venus and the so-called Admiralty are weli worth seeing. Tinv war-ships were built here and sailed on the Gatchina lakes, sometimes taking part in ‘sea battles’ arranged to amuse Paul and his ‘poteshnii’ soldiers (boy-soldiers under Paul). Among’ the other well-preserved places of interest in Gatchina is the Priamtsky Palace built in 1798 by the architect N. A. Lvov. The architecture of the palace stirs the admiration of the visitor. Mention should be made of the architect A. D. Zakharov, one of the creators of the Gatchina ensemble. On one bank of the river Kolpanka he built the Farm, on the other — the Aviary.
The garden and park ensembles — the Private Garden, the Upper and Lower Parks, the Silvia. the Botanical Gardens — are excellent places for resting and relaxing. Wonderful statues and obelisks, elegant pavilions and small bridges, as well as beautiful gates, adorn the Gatchina park — one of the outstanding suburbs of Saint Petersburg for its artistic and historical interest. 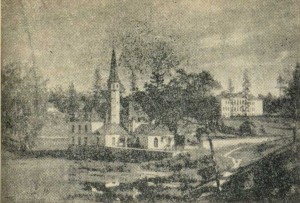 September 27, 2011
Tags: GatchinaPalaces and Park of the Town of Gatchina