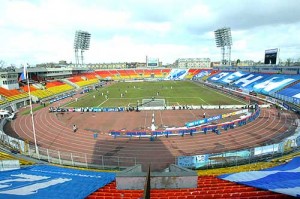 Erected on the south-eastern extremity of Petrovsky Island in 1925, the stadium was restored and reconstructed in 1957—1961 by the architect V. M. Fromzei. It is quite large (28,000 seats) and conveniently located close to the centre of the city. Important football and hockey matches are held here.