Monument to V. I. Lenin in front of the Finland Station 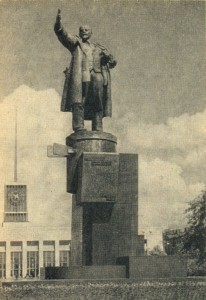 One of the best monuments to the founder of the Communist Party and the RussianState, if symbolizes the remarkable revolutionary history of the city. The memorial was designed by the sculptor S. A. Yevseyev and the architects V. A. Shchuko and V. G. Qelfreich. It was inaugurated on November 7, 1926 to commemorate one of the most striking events in the glorious history of the Great October Revolution. It was here, in the square in front of the Finland Station, on April 3, 1917, that Ilyich, having just returned to his country, fervently called upon the revolutionary masses to fight for a socialist revolution.
Lenin’s speech, delivered from a steel platform, the turret of an armoured car (it now stands at the entrance to the V. I. Lenin Museum), sank for ever into the hearts of tens of thousands of workers, soldiers and sailors who came to the square to meet their beloved leader.

September 20, 2011
Tags: Monument to V. I. Lenin in front of the Finland Station