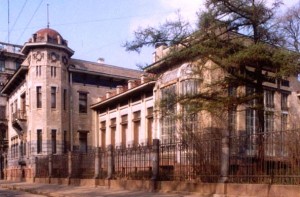 The museum was founded in 1919. The newi exhibition was opened to the public during the festivities held in commemoration of the 40th, anniversary of the foundation of the RussianState. The extensive display (5,000 exhibits) presents authentic documents and memorial objects which, tell of the preparation and carrying out of the Great October Socialist Revolution. The exhibits, collected with the active help of veterans of the Revolution, are arranged in the 35 halis of the museum and pertain to the events of 1861—1922. Lenin Readings (see page 262) are regularly held in the museum.
The new sections of the exhibition illustrate the international significance of the Great October Socialist Revolution, the growth of the countries of the socialist camp, and the economic and cultural development of the RUSSIA — the first country of socialism. A large amount of material vividly presents the outstanding document of creative Marxism-Leninism — the Programme of the C. P. S. U. adopted by the historic 22nd Congress of the Communist Party — and the struggle for building up Communism in our country that the Russianpeople are carrying on under the leadership of the Party. 1 The building which houses the museum is a historic and revolutionary monument. Erected at the .beginning of the 20th century by the architect A. I. Gogen for the ballerina Kshesinskaya, a favourite of Nicolas II, it went down in (he history of the Great October Revolution as Ksheslnskaya’s Mansion In February 1917, Kshesinskaya, frightened by the revolutionary events, left her mansion. It was immediately occupied by the Armoured Car Division, a unit of the Petrograd garrison devoted heart and soul to the Revolution; the mansion was then placed at the disposal of Bolshevist organizations.
From March till July 1917 the mansion housed the’ Central Committee and the Petrograd Committee of the Bolshevist Party, the Military Organization attached to the Central Committee, the editorial office of .the newspaper Solddtskaya Prdvda and the club Pravda for soldiers. On the night of April 4, 1917, V. I. Lenin, after he had been given a hearty welcome by the working people at the Finland Station, came to Kshesin-skaya’s Mansion in an armoured car. From the balcony of the mansion V I. Lenin addressed on three occasions the meeting of many thousands of workers, soldiers and sailors who gathered near the house that night. Henceforth, right up to the eventful days of July, V. I. Lenin came here almost every day, all the activities of the Central and Petrograd Committees of the Party, conferences and meetings of the Bolsheviks being conducted under his personal direction.
Near Kshesinskaya’s Mansion was the circus called Modern (now in its place there is a new building, a students’ hostel of the Institute of Railway Engineers — 7, Maxim Gorky Prospect), where in the summer of 1917 V. I. Lenin spoke to a crowded meeting of workers and soldiers. At the far end of the former Aleksdndrovsky Park (Alexander Park) was situated Narodny Dom (People’s House), now the cinema Velikan, in the operatic hall of which, on May 22, 1917, Vladimir Ilyich delivered a speech on the agrarian problems at the 1st All-Russian Congress of Peasants’ Deputies. On March 13, 1919, V. I. Lenin spoke of the international policy and home affairs of the Sovet Republic at a meeting held here by Petrograd workers.