The Russian capital of metalworkers 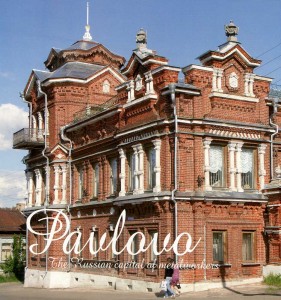 The ancient city of metalworkers, the Russian capital of metalworkers — Pavlovo — is located on the high right-hand bank of the Oka river. It was founded back in the 13th century. Various crafts started to develop rapidly in Pavlovo, which was situated along the waterway from Moscow to the Volga. Soon steel industry became the most important one. The famous Pavlovo locks, penknives and kitchen knives, scissors, razors and scale-beams were sold all around Russia, as well as abroad. 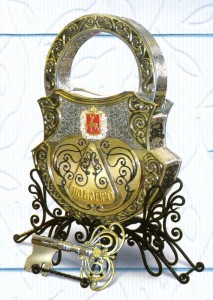 By the end of the 19th century the village of Pavlovo had developed into the interregional center of metal processing that covered two hundred neighbouring villages in two provinces — Nizhny Novgorod and Vladimir. As if competing among themselves, the wealthy farmers built a large number of solid houses ornamented with figured brick, white stone, fanciful smithery and wood carving. Such various styles of architecture as baroque, classicism, eclecticism and modernism can found in the streets of Pavlovo.

The mansion of Gomulin, a 2nd class (guild) merchant from Gorbatov, built in 1885, became the architectural symbol of Pavlovo. Now there is the History Museum. The interior of the mai building corresponds to the rich exterior decoration of the mansion, for there you can see carved wooden doors, tiled and decorative stoves glued-laminated parquet and luxurious ceiling modeling. There are m< than thirty thousand items in the museum collection. Among the locksmithery wonders of the museum exposition there is a lock that weighs 0.7 g which is made by the legendary craftsman Khvorov. Pavel Kulikov keeps surprising the visitors with his crafts as well. Amo his miniatures that are exhibited in the museum there is a lock for the eye of a needle that weighs only 0.9 g, a knife — «a mote» that is less than 1 mm long, and finally a mechanical flea. When it is wound up, the flea starts to hit a tiny anvil with a tiny hammer and to stamp its foot with a tiny gold bast shoe (lapot) on it. A demonstrational smithy where masterclasses are held was opened in the museum in 2004.

The instrument of metallurgists.

Pavlovo surprised all Russians by 400-kilogram lock that was registered in the Guinness Book of Records.

Pavlovo stood out against other Russian villages because of the original and even unique hobbies of its residents. The neighbourhood of Pavlovo has been boiling in spring with cockfights and goosefights for three hundred years already. The Pavlovo breed of game-cocks was as famous around the country as the celebrated English and Malayan ones.
The citizens of Pavlovo also bred more peaceful birds. For example, in the 19th century the chapmen sold the special Pavlovo breed of canaries all around the Russian Empire. But the most famous ancient local entertainment was indoor citrus-growing. Now it is difficult to say how and when the sweet-scented overseas fruit got to the village,
but today the Pavlovo kind of indoor lemon is well-known in many parts of Russia. There is even a monument to the indoor lemon in the center of Pavlovo now. 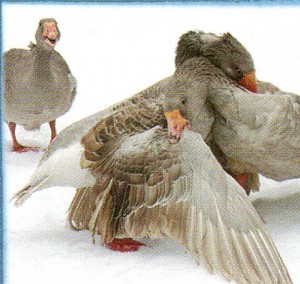 It would be very interesting to visit the museum of the Pavlovo Automobile Plant, the Kirov Museum of Art Objects, the Pavlovo Technical School of Arts and Crafts and private workshops.

Pavlovo from height of the bird’s flight

The traditions of metal processing are not gone away. Forged roses, cold hunting steel, female jewelry and cutlery, richly decorated with engravings are preserved now thanks to the work of the Pavlovo craftsmen. And some time ago the citizens of Pavlovo surprised all Russians by a 400-kilogram musical lock that was registered in the Guinness Book of Records. You can see this wonderful lock in the cafe Na Sennoy while enjoying the specialties of the house and listening to the canaries’ songs. There are two private hotels are available for tourists in Pavlovo. 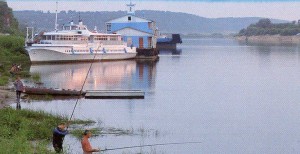 Pavlovo on the Oka river.